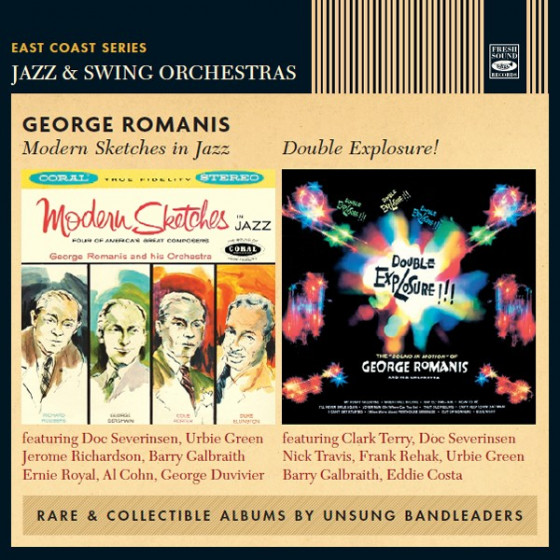 When the dust from the collapse of the Swing Era settled, there were few big bands left that had survived. Yet, because they loved the swinging drive of a full-on jazz orchestra, a series of adventurous and unsung bandleaders optimistically organized some fine, but short-lived big and medium-sized orchestras that were packed with jazz and studio musicians, holding the flag of Swing high.

George Roumanis (or Romanis) was born in Trenton, NJ, in 1929. He began playing bass professionally at the end of the 1940s with dance bands. He rendered his fine rhythmic assistance to Charlie Spivak, Ralph Flanagan and Ralph Marterie among others. However he would not become active in the jazz field until 1954, when he joined the Johnny Smith Quartet, both as a bassist and arranger. During the course of his career he also wrote charts for such illustrious bands as those of Benny Goodman, Count Basie, Stan Kenton, Woody Herman and Sal Salvador.

As a leader, in 1959 Romanis recorded Modern Sketches in Jazz, a big band album dedicated to four of America’s great composers. For this first project, he put together a big orchestra with a rhythm section featuring percussionists who doubled on several instruments. Before writing a single note, Romanis studied the lyrics of all of the songs he wanted to record with the aim to capture, instrumentally, their basic “message.” The resulting music is best described as impressionistic. For his second album, Double Explosure!, Romanis returned with another first-class big band. It was a punching, vital and swinging organization comprised of top-flight East Coast jazz players. The leader’s arrangements are all humor-filled crowd-pleasers, bound to delight anyone who loves the sound of a big band.

"The late 50s and early 60s were tough times for touring jazz orchestras. What people forget is that the studios which were used for TV and radio were fertile grounds for some exciting big band sounds. These two sets show what happened once the dust from the Swing Era settled, with two orchestras being featured here.

From the swinging Decca Pythian Temple, Jersey-bred George Romanis shows the arranging skills he honed with Basie, Goodman, Kenton and Herman with these ’59 and ’61 albums. Romanis stuffed his band with all stars like Ernie Royal/tp, Doc Serverinsen/tp, Clark Terry/tp, Al Cohn/ts, Jerome Richardson/ts-fl, Eddie Costa/vib, George Duvivier/b, Barry Galbraith/g and Chuck Wayne/g to name just a handful. The 1959 album features songs by Ellington, Gershwin, Rodgers & Hart and Cole Porter, with exotic congas on “Mood Indigo,” feathery flute on “Someone to Watch Over Me” and Kentonesque brightness for “Too Darn Hot.” The 1961 album has a noir-ish “Any Old Time,” a snappy “Penthouse Serenade” and a gorgeous “My Funny Valentine.” Includes informative liner notes in the booklet, with the music an oasis for Big Band fans."