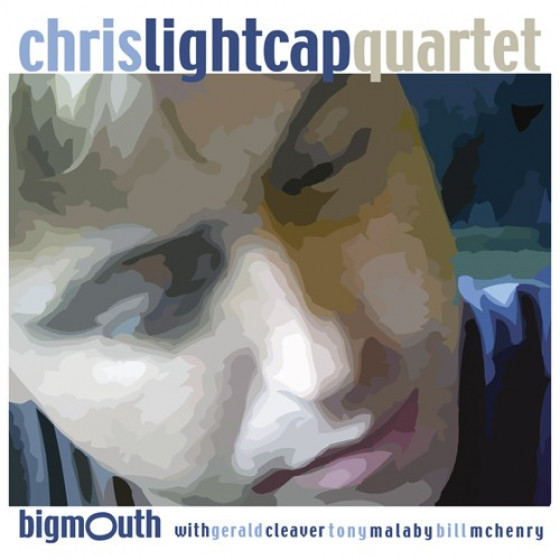 "Bigmouth" is bassist Chris Lightcap's much-anticipated second release as a leader for Fresh Sound. His first CD, "Lay-Up" was rated "one of the year's best" by the New York Times and reached the top ten of CMJ's jazz radio chart.

"Bigmouth" is quite simply the next stage in the development of a vital musical entity. Chris Lightcap really consolidates himself as a versatile and inspired leader. He brings together a group of regular collaborators who only go to add further colour to Chris already rich compositions. Here we are presented with seven original numbers and one cover version, of the Lennon-McCartney tune, Dig A Pony, which is given a really personal makeover from Lightcaps nimble bass playing. Featured on the album is New York saxophonist Bill McHenry (a Fresh Sound New Talent regular and regular collaborator with many artists, like Rebecca Martin), Tony Malaby, also on tenor, and fiery improv-drummer Gerald Cleaver (also a Fresh Sound New Talent leader, with his critically acclaimed Veil of Names). This a young and thoughtful album that offers a twist on the usual quartet sound.

All music written by Chris Lightcap, exccept where noted

"A well-rounded young bassist, Mr. Lightcap leads a two-tenor band that gets ferocious in its free-jazz with motifs style "Lay-Up" (Fresh Sound) is one of the years winners so far."

"Brooklyn bassist Chris Lightcap has distinguished himself as a sideman with the likes of Joe Morris and others, and now is the time for him to take a leading role. Featuring seven originals and one Ornette Coleman tune, "Lay-Up" is, like Lightcap's playing, both melodic and adventurous with surprisingly deep grooves . . . a great debut."

"Bassist Chris Lightcap's hip new quartet has a two-sax frontline (Tony Malaby, Bill McHenry) that positively burns through a repertoire reminiscent of Ornette Coleman. Hear them, then go pick up their fine new CD, Lay Up."

"Theres no reason to wonder about unity: This is a band, not a pick-up group. A few spins through the new Lay-Up will tell you that."

"With the release of Bigmouth, Chris Lightcap's sophomore effort on FSNT, he continues to carve a personal niche into the modern jazz world. His music adroitly surfs between mainstream and avant garde sensibilities without insulting either camp. The quartet comprises two strong tenor sax players up front, with the able support of drummer Gerald Cleaver and Lightcap on upright bass.

If you enjoy Ornette Coleman's classic quartet, you can find plenty of parallels between that sound and Lightcap is doing now. Lightcap's approach to melody, harmony, and rhythm has a compelling harmolodic quality, and his bass work reveals an affinity to the "inside/outside" stance of Charlie Haden or Charlie Mingus. Make no mistake though, he is doing his own thing. A very informed practitioner of the modern state of jazz, he has developed a killer band to realize his particular vision in regards to "the shape of jazz to come."

As a rhythm section, Lightcap and Cleaver are inseparable. Their sound is simultaneously elastic and tight, and they work hard to create a fertile hotbed for their cohorts. Their solos are always right to the point and cogent. Cleaver is one of the most messed-up drummers on the scene today! The man breaks a song form into smithereens, yet never loses the One. He can swing, groove, and still be acutely abstract throughout the course of a tune, channelling it all into an overall compositional aesthetic. Fans of Ed Blackwell take note and check the next generation.

Not to be outdone by the rhythm section, tenor players Tony Malaby and Bill McHenry play with verve and respect for their musical roots. Traces of Dewey Redman's tone and phrasing, Anthony Braxton's mid-70's melodic conception, and Jimmy Lyons' muscle are evident at various times throughout the proceedings. This group plays with loads of gritty soul, hard bop, and guts.

This inspired music from a group of relatively young players covers a broad range of emotional language with simpatico, elan, and panache. If Bigmouth is any indication of the current state of health in the world of modern jazz, the art form is far from worn out. Many years of growth clearly remain."

"Bassist Chris Lightcap, who has been building a reputation in New York ever since he moved there in 1993, has released another CD on the Barcelona-based label, Fresh Sound New Talent. Continuing the instrumentation that he decided upon before recording "Lay Up" in 1999, Lightcap joins with drummer Gerald Clever to push the group with rolling currents that allows tenor saxophonists Bill McHenry and Tony Malaby to advance the music with freedom and unpredictability just two of the reasons for enjoying "Big Mouth".

The abandonment of a chorded instrument allows the quartet to explore ideas at length, reminiscent of some of Ornette Coleman's work. The fact that Lighcap has performed with Cecil Taylor, Butch Morris, and Sunny Murray indicates that his involves unconventional and personalized approaches. But, then, his recent work with Regina Carter proves his ability to back up more popular musicians as well. So which style is Lightcap's? Well, both are. But "Big Mouth" by necessity of instrumentation and concept involves consistency of execution, not as tenor battle, but the feeding of ideas back and forth between McHenry and Malaby.

Celebratorial, rather than the expected bass lead-in, starts with the 2 tenors in unison before Lightcap takes over by setting up the bass line that governs the remainder of the piece by energizing the improvisation. Otherwise, Lightcap's presence is felt throughout all of the tunes, changing their feel as much as do the changes from the light pizzicato of "Big Mouth's" introduction to its swaying vamp. "Pacifico" spins immediately into a cyclone of vortexing patterns of controlled chaos, threatening to dissipate its energy through encroaching formlessness. But Lightcap and Clever don't allow that to happen, providing boundaries for the saxophonists explorations as well as the intense force behind them. "Big Mouth" reinforces the impressions from "Lay Up" that Chris Lightcap is one of the few bassists who not only can successfully lead his own group, but develop intriguing ideas that distinguish his music from anyone else's."