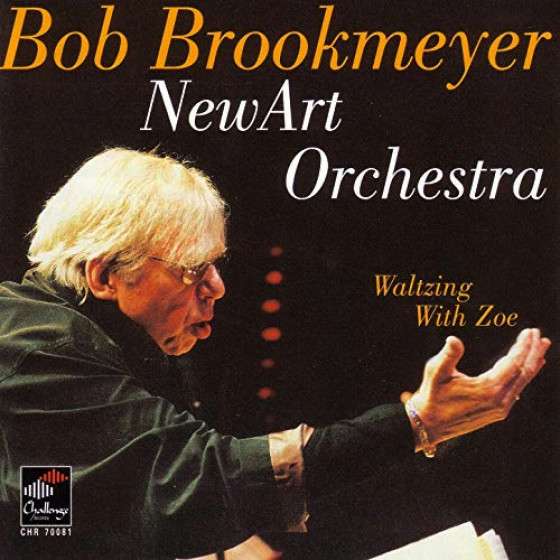 American trombonist/pianist/arranger Bob Brookmeyer(1929-2011) is a true legend in modern jazz. He played with Stan Getz, Gerry Mulligan, Jimmy Giuffre, Clark Terry, Thad Jones, Mel Lewis and many other jazz greats. Since 1981 he works regularly in Cologne and Stockholm as composer/conductor which resulted in the creation of the New Art Orchestra.

This is the second CD he recorded for Challenge Records with this orchestra, reinforced with Dutch trumpeters Eric Vloeimans and Angelo Verploegen and trombonists Jan Oosting and Bert Pfeiffer. Bob said: "The music came out a little different for me this time. It arrived as '"character pieces," with a will of their own and I sometimes felt like a transcriber, following orders."

All compositions by Bob Brookmeyer

"Back in the swing era of the '30s and early to mid-'40s, big band leaders were not a minority in the jazz world. That was back when jazz was part of popular culture and many jazz improvisers found their names at the top of the pop charts. But times change; from the late '40s to the 21st century, big bands have (thanks to economics) been the exception instead of the rule in jazz. These days, the vast majority of jazzmen will never have the chance to lead a big band. But Bob Brookmeyer has been among the lucky ones; the veteran valve trombonist has, over the years, done his share of arranging for large orchestras. Recorded in Holland in January 2001, this Dutch release finds a 71-year-old Brookmeyer conducting a 19-piece big band he calls the New Art Orchestra. Many of the musicians are Dutch, and the outfit includes a four-piece rhythm section as well as 15 horn players (including Brookmeyer himself). Brookmeyer wrote everything on the album, and his arrangements are quite attractive on classical-influenced post-bop pieces like "Child at Play," "Fireflies," and "For Maria" (which was written for big band leader Maria Schneider). Another highlight of the CD is the somber "American Tragedy," which was not inspired by the terrorist attacks of September 11, 2001 -- Waltzing With Zoe was recorded eight months before those attacks -- but rather, by the U.S. Supreme Court ruling that caused Al Gore to concede to George W. Bush in the presidential race of 2000. In Brookmeyer's opinion, the Supreme Court made a decision that was inspired by partisan politics rather than law. But whether you agree or disagree with Brookmeyer's political views, "American Tragedy" is a fine piece of music. And Waltzing With Zoe is a fine addition to his catalog."