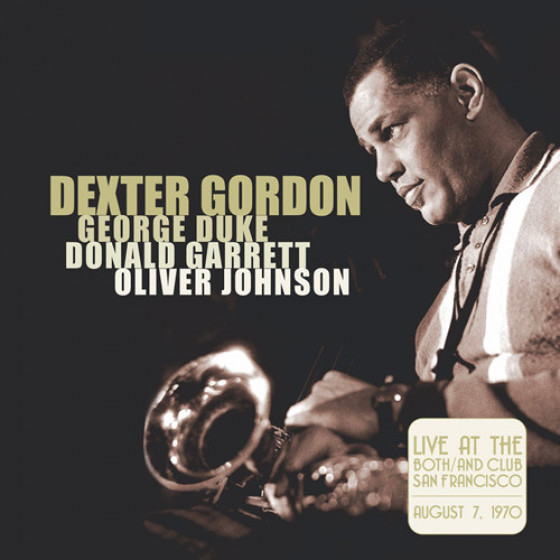 A unique concert of two legendary performers; the late great saxophonist Dexter Gordon and keyboard/piano hero George Duke. Live at the Both/And Club in San Fransisco recorded August 7, 1970. This stunning classic jazz performance features also Donald Garrett on bass and Oliver johnson on drums. This CD is a must have for every fan of quality jazz.

"Like many touring jazz artists, Dexter Gordon worked with local rhythm sections on a regular basis to make him more affordable to nightclubs. On this evening in 1970 at the Both/And Club in San Francisco, the young pianist George Duke, bassist Donald Garrett, and drummer Oliver Johnson were recruited to work with the tenor saxophonist. After one afternoon rehearsal, Gordon was satisfied.

Although Duke had a strong jazz background, at the time he was playing boogaloo music up the street and had also recently joined rockers Frank Zappa & the Mothers of Invention, so he was hardly the typical bop pianist one associates with Gordon's recordings. But nothing bothered Gordon, as he let fly with long, quote-filled renditions of gems like his "Fried Bananas" (based upon the changes to the standard "It Could Happen to You"), Thelonious Monk's "Blue Monk," along with a smoking romp through J.J. Johnson's "Wee Dot." There are some lesser moments. "There Will Never Be Another You" begins rather awkwardly, with both Garrett and Johnson seeming unsure of their footing, though eventually order is restored by the leader.

The music on this live CD has been issued in various forms by several labels, though this release is evidently more complete than its predecessors. While the fidelity is hampered consistently with overmodulation of the drums and other sonic difficulties, the energy of this live set enables it to overcomes the audio shortcomings."

"When he was on stage, he was 'The Man!' Upon finding this tape of Dexter Gordon I knew I had something very special. I want the listener to feel as though they are actually attending a Dexter Gordon show, some thirty years ago."