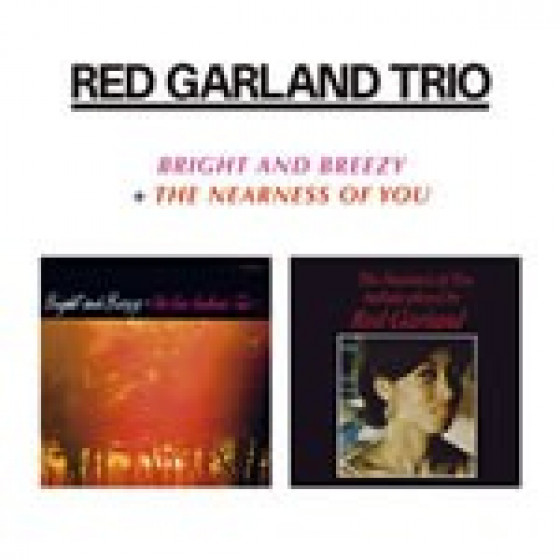 This CD presents two 1961 LPs by the Red Garland Trio: "Bright and Breezy", featuring Sam Jones on bass, and Charlie Persip on drums, and the ballad album "The Nearness of You", with Larry Ridley on bass, and Frank Gant on drums. Garland would never record again with either of these two formations of his trio.

Personnel in "Bright and Breezy":


Personnel in "The Nearness of You":


Note: Given that the combined duration of the two albums exceeds that of a single CD, it was decided to exclude Lush Life from the second LP, as it was an unaccompained piano piece and not a trio performance.

"During 1961-1962, following a long series of recordings for Prestige, pianist Red Garland recorded four LPs for the Jazzland label. His style was unchanged from a few years earlier, and this trio set with bassist Sam Jones and drummer Charlie Persip (reissued on CD on the Original Jazz Classics label) is very much up to par. Highlights include Garland's interpretations of "I Ain't Got Nobody," "Blues in the Closet," and "Lil' Darlin'." An enjoyable straight-ahead session."


-The Nearness of You

"Unlike his slightly earlier recordings for Moodsville (which feature Red Garland on unaccompanied piano solos), this strictly ballad date has Garland joined (on all but the solo "Lush Life") by bassist Larry Ridley and drummer Frank Gant. Since all eight of the standards are taken at the same medium/slow tempo, there is not much variety here, keeping the CD from being essential. But Garland's attractive and distinctive chord voicings, plus his ability to uplift melodies while swinging at a slow speed, make this project a success. Highlights include "The Nearness of You," "Where or When," and Irving Berlin's "All Alone." Particularly effective when used as background music."