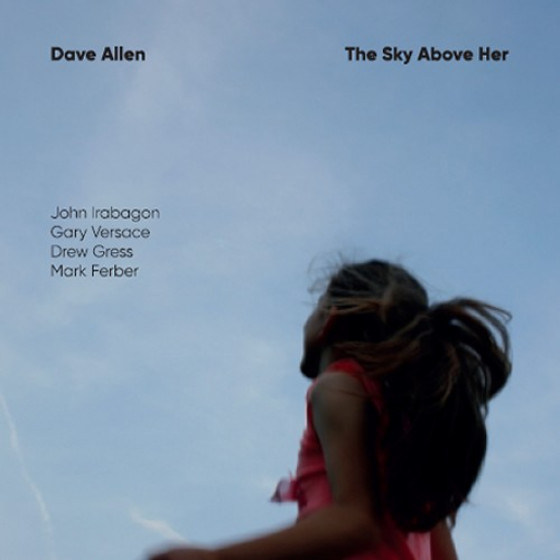 The Sky Above Her

All compositions by Dave Allen

"Guitarist Dave Allen's satiny-smooth tone and precise technique belie an intrepid sensibility that is eager to rise to the surface. So unsuspecting listeners who cue up the title track of The Sky Above Her, Allen's third album as a leader, might at first be tricked into thinking they'll be listening to something easy on the ears, as the track possesses an ingratiating, comfortable feel; Allen's melodicism definitely contributes to that impression. But by the album's second cut, Allen's adventurous side emerges with a vengeance, and it's clear that this record has a lot to offer to those wanting something beyond a pleasant listen.

Allen has a couple things going for him. One is his compositional creativity. Yes, he can write strong melodies, as the title track or "West Wind," a lovely little bossa nova piece, demonstrate. But it's on the more complex, intricate cuts that Allen's fiendishly clever constructions show themselves. "Pulsion" joins odd-meter time signatures to a crafty melody that evolves enticingly over the course of its nine-plus minutes. Similarly, "Lacuna" has a devious head that at first defies parsing, but as the track develops one stops trying, simply taking up the quest to find out where it goes. The music's challenging aspects are undeniable, but there's an inviting quality to Allen's writing that renders it enjoyable even in its most labyrinthine moments.

It also helps that Allen has a top-notch band for this date, capable not only of keeping up with him but in adding levels of excitement and verve that take the music to another level. Two of Allen's partners, bassist Drew Gress and drummer Mark Ferber, appeared on his previous album, Real and Imagined (Fresh Sound New Talent, 2007), and the chemistry the two possess as a rhythm unit is essential for Allen's thornier frameworks. Saxophonist Jon Irabagon is, as always, both versatile and pugnacious, capable of sketching Allen's appealing melodies but just as likely to unleash some fierce solos, especially on "Russian Dragon," the record's most hard-driving cut, where Irabagon seems barely contained in his manic energy. Finally, Gary Versace brings not his oft-used accordion but his piano and Rhodes to this session, and although it's the first Allen record featuring a keyboardist, it's a terrific choice, as Versace fits perfectly into this quintet. His comping throughout adds depth to the pieces—witness his support during another of Irabagon's scorching moments on "Thrown Voices"—but he also provides some tenacious solos of his own, especially when he stretches out on the Rhodes during "Lacuna." Allen's own guitar work shows him more than worthy of keeping this esteemed company, as his playing reflects a maturity that allows him to avoid ostentation in favor of thoughtful solos that are both expertly played and lyrical, with just the right amount of brio and unpredictability.

With music that is both sophisticated in its concept and execution and, at the same time, deeply engaging, The Sky Above Her is a keeper, reflecting Allen's notable strengths as a guitarist, bandleader and composer. As this is only his third release in thirteen years, he's certainly a very deliberate musician, but hopefully we won't have to wait quite so long for his fourth record."