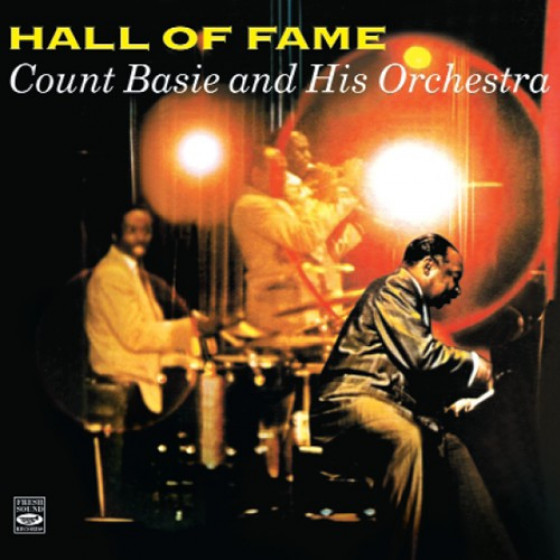 Strangely enough, Hall Of Fame has been forgotten, over the years, by most of the big band fans. Recorded at the same time as the April In Paris sessions, this one truly deserves to be rediscovered. There is no explanation for this albums seemingly lack of recognition; it is every bit as good as the other. There is plenty of substantial moments on these sides. The opening, Inside Out, is a long slow blues, with Marshall Royal playing some great, funky and warm clarinet choruses. Joe Newmans perennial muted trumpet shines in Low Life. Frank Foster plays pretty in his own original Lady in Lace. The modern language of Thad Jones and Frank Wess is at its best on Move and that Just to mention a few highlights. This is a must for any fan of the Count. Timeless.

"Strangely enough, Count Basies album Hall of Fame has been forgotten by many fans. It is astonishing because everything is great here: the sound quality, the charts, the soloists, the composers and the arrangers. Not only that, but it is also intriguing that some of these tunes come from the same dates as the famous April in Paris, now and always a classic. Count won a Grammy Hall Of Fame Award when it was released as a single.

As you will hear, Hall Of Fame begins with a very unusual long Blues, introduced by the Master himself, the Count, on piano. That was one of his big secrets Freddie Green once explained to me; to play that slow, with only a very few notes, but all of them meant something deep. And the way that he made his piano sound was totally amazing! He was the very best at that. He got that very deep sense of the Blues. He was the king of this right in the pocket tempo that nobody else got. Suddenly, comes a surprise. A long, beautiful clarinet solo is heard, with a great, soft but aggressive sound at the same time, a sound that we are not familiar with... Its the very wonderful Marshall Royal. What a solo! Its a pity that he didnt play any more clarinets in the band after this one.

This album features many soloists. Its so rewarding to hear Frank Foster, Frank Wess, Joe Newman, Henry Coker, Thad Jones, Benny Powell, Bill Hughes and the Count again, all at the very top of their games and the rhythm section, the basic burning hot fire of the band! How can we resist?

Most of the arrangements here were written by the brilliant Ernie Wilkins, with a few exceptions. Lady in Lace, cooked by another master, Frank Foster, is a superb and classy tune. My Lady In Lace was meant to be an answer to Dukes Satin Doll, or so Fos told me. Duke had just composed Satin Doll at the time, and it immediately became a hit. I was impressed. I sincerely thought it was a pretty fair tune, myself. I remembered that when Milt Jackson recorded with Count and the big band in 1978, he asked him to play that particular tune because that was one of Milts favorite pieces (listen to Milt Jackson + Count Basie + The Big Band Vol.1, Pablo OJCCD 740-2). Fos takes a sexy but virile tenor solo. We had almost forgotten how great he is on that instrument. Wow!

Neal Hefti did Lollypop and Frank Wess penned drummer Denzil Bests Move. For the closing tune of this set, we haveas for the opening one, by the way another unusual and surprising medium-slow tempo, composed and arranged by a very young talent, Johnny Mandel. It is interesting to pay attention to some of the new voicings of the band and the way that they syncopate them. It sounds Basie, indeed, but a different way of phrasing some parts of the tune can be detected. That was the last tune that Johnny did for Basie, and we all regret it. Youll agree with me that this reissue still sounds fresh and exciting, even after more than 5 decades. Count Basie and his Men stay always young. Hall Of Fame is definitively one of his very best efforts of that golden 1950-1960 period. Enjoy! Cheers"