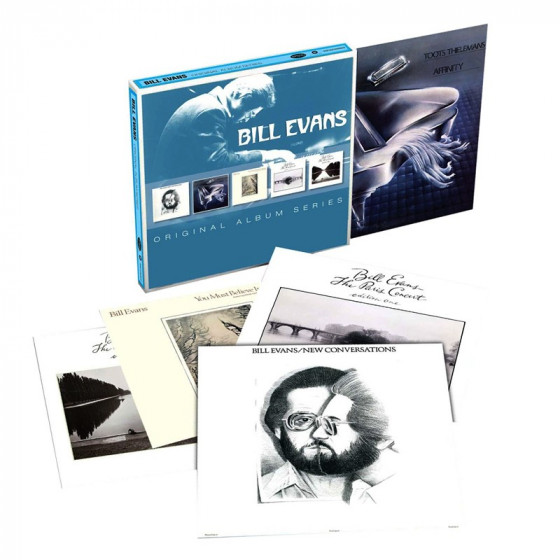 Probably the most influential pianist in jazz, Bill Evans has left his mark on the likes of Herbie Hancock, Keith Jarrett, Chick Corea and Brad Mehldau. The pianist on Miles Davis’ quintessential 1959 album "Kind of Blue" and a key figure in the development of jazz piano, Bill Evans was a pioneer in multi-track jazz recording, a key player in the rise of modal jazz, and a multiple Grammy Award winner.

Covering the later part of his life, from the Warner Bros and Elektra studio and live recordings, here are five gems in one pack.

After a somewhat quiet and introspective period in the early 1970s, Bill Evans signed for Warner in 1977 and there then began a highly creative period resulting in some of his most consistent studio recordings in well over a decade. This culminated in the superb ‘Turn out the Stars. Complete Live at the Village Vanguard’ sessions from 1980 on Warner, re-issued on a pared down edition, or as a single CD sampler.
For those on a tight budget, the 2005 double CD ‘Anthology’ was a useful overview of Evans tenure on Warner, covering the four years between 1978 and 1980, and including examples of the two Elektra live in Paris recordings. This is now superseded by this bargain five CD set offering, part of the budget price original album series. A real favourite of this writer is ‘You must believe in spring’, which must rate among Evans’ strongest studio albums of the 1970s. Frustratingly, the three bonus cuts on the single CD re-issue are not included here, but this is a judicious selection of popular pieces all the same. Jimmy Rowles’ ‘The peacocks’ receives a suitably refined treatment while the television sound track, ‘Theme from Mash’, became a staple in Evans’ repertoire from that point onwards and never has that song sounded more beautiful than in Evans’ most capable hands. Rounding off a high quality album is a reworking of Bacharach and David’s, ‘A house is not a home’, that is impressionistic in tone and meditative in outlook. Aiding and abetting Evans were bassist Eddie Gomez and drummer Elliot Zigmund.

The third instalment of Evans performing a solo recording, effectively duetting with himself is to be found on ‘New Conversations’, a riposte of kind to ‘Conversations with myself’ from 1963 on Verve. Here the pianist has a ball with himself, alternating on both acoustic and fender rhodes. Stand out interpretations include Oscar Hammerstein and Jerome Kern’s, ‘Nobody else but me’ and a cover of Duke Ellington’s ‘Reflections in ‘D”. As one might expect with Evans, the touch is exquisite throughout. Jazz and the harmonica are not immediately connected to one another, but then Belgian musician Toots Thielemans was an out of the norm individual and the duet album with Evans, ‘Affinity’ is surprisingly good and the two blend with a natural empathy developing. This album is notable for the first appearance and rendition of ‘Do it for love’, the Paul Simon composition while in a more traditional songbook vein, the ballad, ‘Body and Soul’ receives a sumptuous interpretation from the pair. Long-time fans of Bill Evans will be wondering where the excellent ‘We will meet again’ album from August 1979 is and the truth is that Warner have seen fit to exclude it from this anthology which is a major disappointment. All the more so because it afforded the listener the rare opportunity to hear Bill Evans in a larger ensemble setting, with that most sensitive of trumpeters Tom Harrell and tenor saxophonist Larry Schneider, Marc Johnson and Elliot Zigmund making up the quintet. This is an oversight and the listener is very much the poorer for not being able to hear the album.

Of interest to fans of live Bill Evans performances are the two Elektra albums, recorded at the French national radio studios in Paris. Evans had finally found a trio that was, if not the exact equal of the superlative 1961 trio, then could compare favourably with that formation. Bassist Marc Johnson and drummer Joe La Barbara collectively reached a degree of intensity that has seldom been rivalled since, and this was unquestionably a precursor to the ‘Turn out the Stars’ recordings. The first volume is slightly the stronger, but both have to be heard in their entirety.

While this may not necessarily be the first, or only place to search for the beginning of a Bill Evans collection, the three studio albums and two live recordings nonetheless represent an accurate summation of Evans in the late 1970s and already hint at the creative peak he was about to achieve with his final Village Vanguard performances of 1980. Evans would tragically pass away later in that year at the age of just fifty-one. His departure was an absolute travesty and musical fans were deprived of what could have been an extend new golden era in his musical career [...]