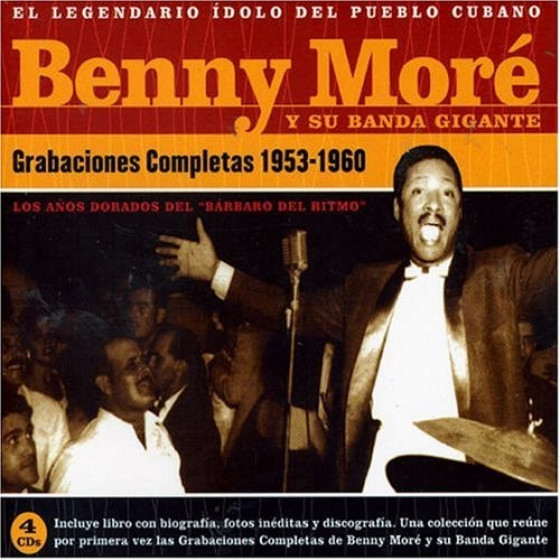 For the first time on CD comes the most comprehensive and exciting collection of the music of Benny Moré, the legendary idol of the Cuban people.

This box set contains 4 CDs with the complete recordings made by Benny Moré with his Banda Gigante (19531960) in chronological order.
This collection also includes a fantastic 124-page book that traces the golden years of El bárbaro del Ritmo from 1953 until his tragic death in 1963. This book contains previously unpublished information about his life as well as an extraordinary collection of photos, many of them published for the first time.

This box set is a must not only for all Cuban music fans, but also for all those who enjoy good, authentic and original music.

"Just like the title says, this brick of a four CD box set, all 89 songs and 124 pages of it, completes the most achieved part of More's recording career, the part that changed the music of the world. And it does it in style. Starting in 1953, with More's first recordings in Cuba under his own name for RCA it goes through his last recordings for the same company a bit before his death of cirrhosis of the liver a decade later. And what a sound he produced during those seven years: a meeting of the big orchestra sound of American jazz with his own liquid tenor and Afro-Cuban percussion. In More, there's a mixture of more than styles, there's a bringing together of centuries, the urban modernism of the bolero singer with the attack and percussive singing of a rumbero. And what he achieved became the pattern for the future. To drift through the box set is a form of musical archeology, as much of what he did during his improvisations became common practice in Cuban music and also in the music of Puerto Rico and New York. There other clues scattered around as well: of the connection Cuba and Mexico had culturally before the revolution; More sings boleros with the Mexican Pedro Flores.

The 124-page booklet explains pretty much everything except the big subjects, i.e. politics and culture. It goes into what was recorded, and why, and where More played and why, and what killed him. There's a discography, and lyrics, and instead of personnel listings, it has pictures of the band during various years, and if you read the text it explains who was playing what when, most of the time. It's all detail and little explanation, and the heaps of photographs tell a better story that's second only to the music. The exceptional quality of the production is at the level, finally, of box sets dedicated to classical music and jazz, exactly what the music and More deserve. The only thing that falls short by comparison, is the sound; it's mostly good, but clearly the set is drawing from private collectors along with other sources and the sound is erratic. It's a small quibble. This set is essential for the casual fan of More, but also for anybody that wants to understand exactly how great the 20th century was in the Americas."