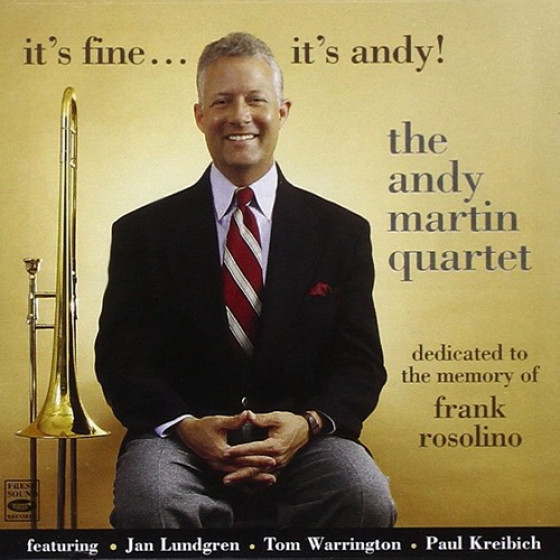 In this album dedicated to Frank Rosolino, he plays for the first time with Jan Lundgren who states: "Andy has taken the best from Frank Rosolino and Carl Fontana and developed a sound of his own. He is a complete musician with good taste and lots of creativity in his playing. Seldom do you meet a musician that is at 'one' with his instrument. To work with Andy was sheer pleasure, so easy and all the time swinging. Without doubt, I dare say he's absolutely one of the greatest trombonists in jazz today. I can't wait to play with him again!"


1. Carl (Bill Holman)
2. Street Scene (Newman)
3. Doxy (Sonny Rollins)
4. The Night Has a Thousand Eyes (Bernier-Brainin)
5. From This Moment On (Porter)
6. Flamingo (Anderson-Grouya)
7. Get Happy (Koehler-Arlen)
8. Nightingale (Wise-Cugat-Rosner)
9. He Ain't Got Rhythm (Berlin)
10.I'm Shooting High (Koehler-McHugh)
11.We'll Be Together Again (Laine-Fischer)
12.Take Me Out of the Ballgame (Norworth-Von Tilzer)

"I must confess that it was chiefly the presence of pianist Lundgren that made my eyes light up when I received this CD, but beautiful though his contributions certainly are, the leader is no less triumphant. The album is dedicated to he memory of Frank Rosolino, and Martin exhibits the same warmth of tone...ideas and technique and governign imagination that distinguished that splendid musician.

These days intelligent and wide-ranging programmes are (happily) almost commonplace, but this one is unusually invigorating. Things could not get off to a better start than with Bill Holman's "Car", written for trombonist Fontana, and "Eyes" (a favourite song of mine) is imaginative, and lithe. The many other highlights include an authoritative reading of Hollins' "Doxy", a tender "Together Again" (another favourite) and two selections as witty as they are satisfying, Irving Berlin's "Ain't Got" and the closing "Ballgame". But that's not to say that the unmentioned cuts are inferior in any way: this is a twelve-track album of consistent class. As noted, the leader and Lundgren are in terific form (try the latter on "Eyes" and "Moment" - wonderful) but Warrington and Kreibich are no less masterly. The quartet evinces a 'primus inter pares' ethois that distinguishes all superior combos, and the session swings with that irresistible floating quality that characterises all the best jazz.

There are excellent sleeve essays from Alum Morgan, Mark Gardner and Dick Bank, and the CD has been produced and packaged with the kind of impeccable professionalism one comes to expect from this admirable label. Highly recommended.