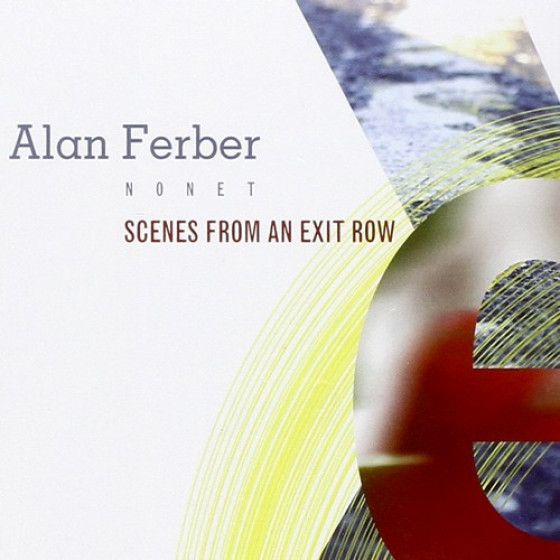 Scenes from an Exit Row

Trombonist Alan Ferber, 30, was born in Oakland, CA and raised in the surrounding Bay Area. Alans musical blood extends from a long line of performers in his family. His brother is currently one of the top-call jazz drummers in NYC and his mother is an accomplished singer, pianist, and guitarist. Alans professional music career began in Los Angeles after graduating with an economics degree from UCLA in 1997. He performed regularly or toured with the bands of Les Brown, Bob Florence, Kenny Burell, Gerald Wilson, Louie Bellson, Jack Sheldon, Woody Herman, Brian Setzer, Vinny Golia and Bobby Caldwell.
Upon moving to NYC, Alan has gradually built his reputation as a "skilled (and) imaginative" trombonist, well versed in both ensemble and solo playing. He has been sought out to perform with some of the greatest jazz musicians in the world including Kenny Wheeler, Lee Konitz, Don Byron, Charlie Hunter, Bennie Wallace, Anthony Wilson, and John Hollenbeck. On the local scene, Alan is involved as a sideman in many of the citys most exciting up and coming bands including the Dan Pratt Organ Quartet, the Sanford/Schumacher Sound Assembly, the Bill Mobley Space Time Orchestra, the Andrew Rathbun Big Band, Gary Morgans Panamericana, the Alexis Cuadrado Sextet, and the Michael Blanco Quintet.
In addition to jazz, Alan has performed extensively in other genres. He has worked with Poncho Sanchez Latin Jazz Band, Dr. Dre, The Temptations, Martha Reeves and the Vandellas, the Paragon Ragtime Orchestra, Nancy Sinatra, They Might Be Giants, Michael Buble, Paul Anka, Ed Palermos Frank Zappa big band, the Argento Chamber Ensemble, and Broadway shows including The Producers, 42nd St., Oklahoma!, Fosse, and Dirty Rotten Scoundrels.
Most of Alans focus has been devoted to his own nonet project. This group, comprised of some of the brightest young talent in NYC, serves as an outlet for new works and arrangements for mid-sized ensemble. The instrumentation includes trumpet, trombone, alto sax, tenor sax, bass clarinet, guitar, piano, bass, and drums. Alan has performed with the nonet in several venues around the city and has recorded a collection of new compositions presented on this CD. As Don Heckman of the Los Angeles Times stated in a concert review of one of Alans performances, "(Ferber) was sounding ready to groove into the new millennium." How right he is.

"Alan Ferber joins the new resurgence of talented young trombonists with vision and leadership. This debut reveals not only solid group musicianship but also high compositional work. Ferber plays his horn trombone with a voice that is robust, warm, and commanding. But the strength is in his writing and how he effectively navigates the ensemble of skilled musicians in executing multicolored music anchored by big horns, modern arranging, and a tight band. Intricate details such as the use of voice with the music on the title composition, the big band swing sound of Reunion, and a nasty blues shuffle on Get Sassy adds to the enjoyment."


"Scenes from an Exit Row is a simply wonderful, unique mainstream recording and a perfect example of one the main problems in jazz today: that such high quality composing and arranging, not to mention the performances of the musicians involved, can easily get lost in the mass of new releases. There is such a surfeit of riches of so many talented people putting out much great music in a multitude of styles that many listeners, even those sympathetic to jazz, might never know that such a record even exists, which would be their loss. Jordi Pujol of Fresh Sound must be given an enormous amount of credit to be giving many such deserving musicians, including Alan Ferber and his nonet, the chance to get their music heard.

The main feeling of the music is the joy of being alive, communicated through the composing, arranging, and playing of jazz. Alan Ferber (not to be confused with Mark Ferber, his twin brother) has put together a set of tracks that show off his writing and arranging skills in a most natural way, without really calling attention to himself, and balance the natural tension between improvisation and arrangement in a larger group setting. The ensemble writing that demarks the sections is superb and very rich sounding as he blends his forces in different ways using colorful and intriguing harmony. Perhaps the best comparison might be to a bit mellower, less quirky Either/Orchestra in the way that the group can expand and shrink its sound and the quality of its solos, but this group is less tongue-in-cheek.

Ferbers original tunes have a kind of long-limbed, unrolling quality that make them hard for me to remember (as opposed to the Gigi Gryce tune Reunion and the more standardly constructed Long Lost), but they nevertheless are able to carry the development of each approximately eight-minute period. Stylistically, Ferber likes to tell stories through sectional development with ensemble playing leading to solos with various kinds of background scoring. He manages to score sections of seeming freedom (as in Scenes From An Exit Row), include some very effective dissonance (Reunion), and break out unexpectedly into charging swing (Kenny Wheelers Kayak).

Emotionally he ranges from big gestures (New View) to evocatively picturesque images (Scenes) to sinuous, sexy bluesiness (Get Sassy). Opposites abound, as on Jigsaw, a piece of sophisticated funk, while the ballad Long Lost plays on the heartstrings. His arrangements bring out the best of the members of his group, who are inspired by their musical surroundings and alternately play as one, but then let loose individually when given the chance.

Extremely uplifting, enlightening, and just plain gorgeous, Scenes From An Exit Row reveals so many details upon repeated listens as it keeps returning to the CD player. With so much going for it, this excellent release will be on my short list for the best of 2005."

- Budd Kopman, All About Jazz