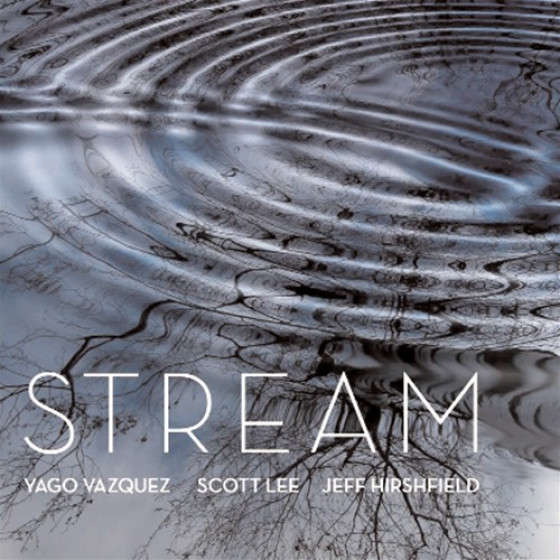 "The "New Talent" on the very fine Fresh Sound New Talent release, Stream, is pianist Yago Vazquez, who hails from Spain, but who moved to NYC in 2008 to study at The New School for Jazz and Contemporary Music where he graduated with honors in 2010. His band mates in this cooperative piano trio are long time partners bassist Scott Lee and drummer Jeff Hirshfield, both of whom would be familiar to anyone who has followed saxophonist Loren Stillman.

While the piano quite naturally is out front in the trio and commands aural attention, the group's sound is highly cohesive. Lee is a very melodic bassist who manages to perform the functions of harmonic support and rhythmic propulsion while spinning out lines that are interesting in and of themselves. Hirshfield's drumming is usually understated and subtle, many times using brushes; his sound and rhythmic feel is additive rather than overtly propulsive.

The trio's music, mostly composed by Lee, but with three tunes by Vazquez and two collective improvisations, is a wonderful mix of shimmering beauty, playfulness and high intelligence. Given that there are fourteen tracks, most range between three and four minutes, with three coming in over five and the longest being seven minutes. The effect is one of listening to highly honed chamber jazz, where there is nothing extraneous.

Each track lives in its own mood and emotional universe, connected together by the band itself. There is always an inner intensity present, along with a seriousness of purpose which draws one in, demanding one's attention. This is not background music as it refuses to stay there.

Much of this expansive, almost vocal presence of the music must be attributed to Vazquez. His touch is elegant, as are his note choices and voicings, and yet there is an insistence and depth to every note, much like that of Marc Copland. Lee and Hirshfield have this same quality in their playing, making the whole more than the sum of its parts.

Stream is music to be savored many times over as it weaves its subtle spell. Outstanding."

"Every once in a while, a studio recording depicts the spirit and sensitivity of a live club date. Stream, the self-titled release by the trio consisting of pianist Yago Vazquez, bassist Scott Lee, and drummer Jeff Hirshfield, does just that. They perform the repertoire as they have done in the countless clubs where they have taken their music. Self-produced with a light hand, letting themselves do what they do best, this is an aural exhibition of original compositions implemented with singular eloquence.

Commencing with the title track, with its curt tempo, the trio establish the mood and direction on each piece. Scott Lee, with his thoughtful bass lines, defines the ballads "On Your Own," and "Nocturno," where he ventures into thoughtful solos vividly carried along by his associates. He displays mastery of bow technique on the baroque blues "Blue Country" and the syncopated "Times Square," though different time signatures, the songs congeal with ease, and show the variety in the mix. Lee composed half of the tunes on the record, and his cohesive musical contribution is immense.

Yago Vazquez brings an interesting back story to this lineup. Hailing from Galicia in Spain, he is classically trained, and came to New York City to immerse himself in straight ahead jazz, as only the environs of the city can offer. His piano work on songs as "Same but Different," and "Brake Tune," indicate immersions into be-bop, while "Miniatura," harkens back to his romantic Spanish heritage. This just touches upon his unique proficiencies, and his prodigiousness is quite noticeable.

With their exuberant interaction and as talented and versatile as Lee and Vazquez are, it is the astute drumming of Jeff Hirshfield that rounds out this superb trio. A sincere veteran of numerous jazz recordings and thousands of gigs, his innate and polished sense of timing is worthy of acccolades. He complies with his role as timekeeper, with no need for flash or gratuitous soloing, and is that rare drummer who is an integral member of the ensemble, all for the sake of the song.

The jazz trio dominated by a pianist has traditionally been one of the most popular formulations in the genre, with high standards set by iconic figures as Bill Evans and Oscar Peterson, to name two luminous examples. What sets Stream apart, is the balance and respect within the three members, as they are all leaders, yet there is no leader, for they are one voice. Granted, this is their first production, but they have established themselves in this small but exclusive segment of jazzthe triowith authority and exemplary musicianship."

"The piano trio and the disc have the same name: Stream. The group is a collective: Yago Vazquez piano, Scott Lee, bass, and Jeff Hirshfield drums. Vasquez is Spanish transplant to New York City, having moved there to study at The New School for Jazz and Contemporary Music.

The set contains a generous fourteen tunes, three penned by Vazquez, nine by bassist Lee, with a couple of collective improv pieces slipped in. Lee and Hirschfield are the seasoned veterans here, with enormous and prestigious resumes, but Stream doesn't sound like the old dogs walking the young dog through the process. The young dog more than holds his own.

The title tune, written by Vazquez, opens the set, a quirky and playful tune that manages to somehow sound dark at same time. It sets the tone for a cerebral listening experience full of intricate melodies and superb and subtle three-way interplay. "On Your Own," one of Lee's tunes unfolds at a measured pace, and features some of Vazquez' pretty comping behind nice bass solo. "F World" has Vaquez' piano sounding as if it's sneaking around dark streets. "Nocturno" is a luscious ballad, in large part a deep conversation between bass and piano.

"A talented and fascinating new trio has arrived on the music scene and they deserve a good deal of fanfare to accompany them. The trio Stream is Yago Vázquez on piano with Scott Lee on bass and Jeff Hirshfield on drums. The album was released on Fresh Sound Records (Fresh Sounds New Talent FSNT-472) earlier this year after being recorded at Systems Two Studios, Brooklyn, New York, on September 12, 2014. The recording was engineered by Max Ross with editing, mixing, mastering by the brilliant Katsu Naito who never ceases to amaze.

Stream (composed by Vázquez) leads off the album with a solo piano introduction to be quickly joined by Lee and Hirshfield in a sweet and swinging number. It is touched with sometimes eddying, now flowing, now rushing fluidity that gives evidence of the songs title. This is a great lead-off piece.

On Your Own (Lee) is a lyrical and lovely piece. Hirshfields brushwork is a smooth backdrop to the moving bass of Lee. The piano is lush and thoughtful.

F World is another Scott Lee composition. The change-up rhythms and chords are bright and attractive. Vázquez is a gifted, percussive pianist as shown when Lee takes off on his bass solos. Naitos mastering is especially lively on this track and he separates the sounds so distinctly but still maintaining the oneness of the artists.

Nocturno is a beautifully done composition by Vázquez. The coolness of the night and the warmth of the company are painted so well by the trio. It is reflective of companionship and poise. It sings of reflection and memory and draws the listener along as if being led in a dance.

456 (Lee) has a strident pace set by the trio. Vázquez walks off on a determined side-street until reset by Lees bass. Hirshfield keeps the movement steady as Vázquez and Lee venture afield.

Blue Country (Lee) gets a bowed bass introduction that gives Lee the full spotlight at centerstage. Vázquez and Hirshfield slowly meld into the bass movement. The bluesy bass and the jazzy are in fine dialogue here. The long-lasting cymbal crashes are like waves coming ashore into this blue country.

Same but Different (Lee) gets off to a full-trio swinging start from the opening. Vázquez and Lee are delightful in their jauntiness. This is an optimistic piece that brings (and keeps) the smile on your face.

Miniatura (Vázquez) has a haunting quality to the opening which is embodied by all three of the artists. The mood shifts to a wistfulness and longing. Lee offers up a touching double bass solo with bow as Vázquez and Hirshfield carry on softly beneath.

There are moments of exquisite delicacy here that are warm and sweet. The haunting motif returns to carry out the piece. This was beautiful.

New Old (Lee) is a cool bit of swing. Scott Lee has repeatedly shown his compositional skills on this album and Vázquez and Hirshfield beautifully execute what Lee has crafted.

Times Square is the brainchild of the trio. Lee starts off with a fantastic bowed bass in double-time. The piano seamlessly blends in and, for a moment, it is difficult to separate bass from piano. Vázquez moves into a bit of odd-tempo improv with Hirshfield in free form. This was like an Escher print.

Missing One (Lee) returns to a more structured setting. Again the trio take on a cool interplay that is worthy of attention. By this point in the album, it becomes clear that Stream is a trio who deserve each otherand I mean that in a good way. There is a grand understanding between them and it contributes to a remarkable union.

Brake Tune is also by Scott Lee. The upbeat time and the cheerful chords with the melodic lines of Vázquez are sunny and wide-eyed. Lees bass solo is just as much fun as Hirshfields ride cymbal keeps the energy up.

NoWhere (Lee) carries a feeling of lostness and the title might imply. It is not the No Place as suggested by the word Utopia but the emptiness of a place unknown and perhaps unbeloved. There is a discernable melancholy and a longing to be somewhere else. Vázquez plays beautifully, sweet and sad.

The Cloisters is another collective piece of the trio. It is a splendid end to a wonderful album. The crossing lines of melody between piano and bass are lush and colorful. The album ends softly, as a whisper.

Stream is a trio worth hearing. The interaction of the artists is as if they are connected at the heart. Streamthe debut albumis a work of great grace and beauty. If this is the shape of things to come, there are good days ahead."

"Far more is known of Hirshfield and Lee than relative newcomer Yago Vazquez, but on this evidence the young Galician, now based in New York where the competition is notoriously cut-throat, will soon be making waves. His richly voiced and confidently poised music sits towards the exploratory end of the contemporary mainstream. Comparisons with David Virelless understated ECM debut arent wasted, although Stream is almost certainly more substantially rooted in the tradition. Compositional duties are shared equally between Vazquez and Lee, but it is two remarkably coherent collective improvisations which perhaps leave the most lingering impression."