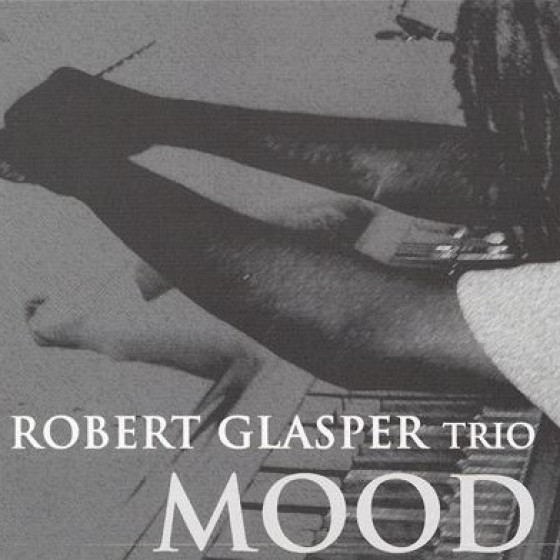 This is the first release on the Fresh Sound New Talent label from pianist Robert Glaspar. Along with Damion Reed and Bob Hurst we find here John Ellis and Marcus Strickland on saxophones - both winners of last year's Thelonius Monk Institute Jazz Awards for Best Saxophonist.

This is the debut album from one of the most exciting new piano players on the scene today. Already a veteran of bands as diverse as Bilal, Russell Malone and Kenny Garrett, Glasper's exploratory outing features him in a basic trio setting with singing sensation Bilal.

All compositions by Robert Glasper, except #1 by Herbie Hancock, #3 by Dietz-Schwartz, and #6 by Irving Berlin

"The young pianist Robert Glasper has some of what we all need: percussive intensity, fresh ideas, improvisatory logic. He's the next one to keep an eye on".

"Over the last few years, mostly at the Up Over Jazz Cafe in Brooklyn and the Jazz Gallery in Manhattan, this 23-year-old pianist has been perfecting a free-range style: he seems to have his eye not on the bar of music he's playing but on the whole piece as one great canvas, and he moves around in it, bass and drums synched to the ebb and flow. "Mood", his first album, with the bassist Bob Hurst and the drummer Damion Reed, does the trick several times, through standards ("Blue Skies") and originals ("Lil Tipsy"). It owes a lot to Keith Jarrett, but there's more gospel in its harmonies and hip-hop in its rhythms. And Bilal, the R&B singer, puts in two eccentric but fascinating performances."

"Robert Glasper is a 20-some pianist originally from Houston who has gained experience and exposure on the New York scene in the bands of Russell Malone, Mark Whitfield, and Marcus Strickland. On the jazz tip, he has also led a noted, well-frequented jam session on Thursday nights at the UpAndOver Cafe in Brooklyn. There's another side to Glasper though: he's been a mainstay in the touring band of R&B sensation Bilal (a guest on two tracks here). So on Mood, his debut record, he brings both influences to the fold, albeit in a way definitely slanted to the jazz side of his expression.

Mood might be interpreted at first sight to be a "mood record." This is accurate only as relates to the tracks with Bilal though, which include a very ethereal version of Herbie Hancock's "Maiden Voyage" and the vocal feature "Don't Close Your Eyes," which is definitely a moody ballad to say the least. For those not familiar, Bilal is not a stereotypical male R&B vocalist in any way, so he should prove to be of interest to openminded listeners. He doesn't try to be a "jazz singer" here but he's not asked to be either, only to bring his thing to the table in terms of generating some serious atmosphere.

The majority of the record, though, is devoted to well-executed, swinging and creative piano trio music made in tandem with Glasper's comrades: bassist Robert Hurst and drummer Damion Reed. This is the same trio that recorded under Bob Hurst's leadership two years ago on UnRehurst, also a very worthwhile record, and it's clear that the rapport the three share has continued to develop. It's a very rhythmically flexible unit that has no trouble changing feels and seems as comfortable playing a mellow ballad as something uptempo. "Lil Tipsy," in particular, offers a great example of the unit's flexibility with time, gradually speeding up and down with wonderful precision: a trio with an automatic transmission, it would seem. "Alone Together," meanwhile, sounds positively Mehldau-like in the reading of the melody. When the solos begin, though, it's clear that's not the route chosen.

Robert Glasper, as the main melodic voice, excels in providing crisp melodic statements. His soloing is not yet terribly distinctive but there are compensations in the form of a nice, lighter touch and in restraining his considerable chops in the service of space.

San Francisco-based horn player John Ellis, a member of Charlie Hunter's various outfits, guests here on two cuts: alongside Marcus Strickland on "L.N.K. Blues," and with Mike Moreno, a Houston-based guitarist who has often worked together with Glasper, on "Mood." These soloists bring a more extroverted quality to the affair that serves as a nice contrast to the sometimes- subdued sound of the trio by itself. The title track, featuring Moreno and Ellis, is especially memorable as an example of Glasper's writing ability. It's a plaintive, open piece with a "suspension bridge" that would be quite at home on a Pat Metheny or Brian Blade record.

Overall, this is a nice if not quite outstanding record. Those who have heard Glasper live or on record - on Mark Whitfield's Raw he is particularly fine - will welcome this worthy first outing by the young pianist. And for those as yet unacquainted with Glasper, there are plenty of younger pianists by whom one could do worse. Look for Mr. Glasper to be an in-demand sideman and recording artist for a long time."

"The 25-year-old jazz pianist Robert Glasper has been playing in New York for five years with moderate success, so moderate that it's hard to find his one album, "Mood," and the top-level clubs haven't taken a chance on booking him. In jazz, where careers come together late at night and over a long period of time, sometimes a progress report is in order.

He's doing fine. So well, in fact, that his first set at the Fat Cat on Wednesday night suggested that his trio with Brandon Owens on bass and Damion Reed on drums deserves comparison with the best of the newer piano trios, those led by Jason Moran, Bill Charlap and Brad Mehldau.

Aesthetically he's somewhere in the middle of that group. His music is less conceptual and more tied into the last half-century of jazz history than Mr. Moran's, and more discursive than Mr. Charlap's or Mr. Mehldau's. On Wednesday he brought out student enthusiasms in impulsive hummingbird movements: some big Erroll Garner chords, some Herbie Hancock harmony, Keith Jarrett group-improvisation tactics, Oscar Peterson speed. But his group which plays regularly at the Up Over Jazz Cafe in Brooklyn when he's in town has its own crisp, skittering cooperation, with hip-hop in its bounce. There was a daredevil aspect to the set as well, giving it urgency. He stretched each piece of music from the start, without losing the audience's concentration.

Each tune tends to occupy so much space in his performances that he only got through four in Wednesday's set. There were two standards, "There Is No Greater Love" and "Body and Soul," and two originals, with some Asian pentatonics and some soul-ballad melody. The standards were more remarkable, if only because he felt freer to put drastic changes into them. Moving through "There Is No Greater Love," Mr. Glasper played quickly, piling energy into the theme just long enough for it to be recognizable, then took it apart. He reaffirmed swing about exactly as often as he destabilized it, with little episodes of minimalist hammering or little spasms that took him off the track. He seemed equally interested in euphony and chaos.

And in "Body and Soul" he varied his strategies, beginning with a fast, restless, elaborate solo-piano introduction, and settling down into an extra-slow reading when the bassist and drummer joined him. Eventually he wound back to the theme, but not until he worked through a great deal of his language as a pianist and a bandleader. "Body and Soul" has lasted for more than 60 years in jazz and still dislodges wonders from young musicians. A comparison of Mr. Glasper's version with Mr. Moran's recent live trio versions will make a dissertation some day."

"Glasper is that rare example of a young jazz artist well schooled in the tradition, but still willing to explore the popular music of his contemporariesa versatile talent who has already been heard with artists from Charles Tolliver and Carmen Lundy to Marcus Strickland and Bilal. His debut recording with bassist Bob Hurst and drummer Damion Reed fittingly opens with Maiden Voyage. The track respectfully recognizes the classic music of Herbie Hancock, who is one of several discernible influences on the leader, but also serves as a forum for modernization in an atmospheric arrangement that features the ethereal voice of hip-hop soul crooner Bilal.

The pianist's lighthearted melody Tipsy reveals an affection for the music of Kenny Kirkland but more importantly exhibits an excellent compositional gift and an extraordinary stylistic range as he moves from articulate straightahead swinging to fluid parallel octave playing to a very personal sort of spacey staccato stride. He segues seamlessly into a rendition of Alone Together that begins with a confident reading of the melody and then proceeds to dissect it into fragments yielding material for experimentation.

The title track is another notable original on which the pianist/composer utilizes the voicing of Mike Moreno's guitar and John Ellis' tenor saxophone to create a quiet intensity. Glasper wrote the words and music to Don't Close Your Eyes, a plaintive plea featuring Bilal's raspy falsetto that unveils a real talent for popular songwriting. Ironically, perhaps the best example of the high level of his creativity comes not from one of his fine originals, but on his arrangement of the Irving Berlin evergreen Blue Skies, where he makes the old standard completely his own.

Even the 2:15 hip-hop Interlude that follows demonstrates a remarkable melodic gift. His In Passing is a surprisingly upbeat lament that reveals a virtuoso approach indebted to Keith Jarrett while expressing an optimistic outlook that is an unmistakable aspect of his own music. The concluding L.N.K. Blues is a blowing session augmenting the trio with the battling tenor saxes of Ellis and Marcus Strickland, on which the pianist shows off his hard bop chops, illustrating emphatically he can do it all."

"Robert Glasper's debut as a leader displays his immense talent in full force as a legitimate original modern jazz voice. The majority of selections are with a trio, perfectly suiting his inclination to improvise, and hints at the hip-hop rhythms of his generation. The clear highlight is his bomb virtuosic interpretation of "Blue Skies." Ideas flow into infinity, he's insanely inspired, with bright melodies bursting like a supernova. He uses chord substitutions liberally and during an unaccompanied bridge, his emotions burn at length. He extrapolates on four notes to a millionth degree for the original "'Lil Tipsy," varying tempos, sometimes dizzying, in measures of four and six. "In Passing" is another original composition, a sweet waltz displaying a fine original melody with elements recalling McCoy Tyner. Vocalist Bilal is on the mystery train for the 12/8 modal ritual, invocation, spiritual, quite different take on "Maiden Voyage," which identifies Glasper's overall sound as reverent, pastoral, and challenging. In addition, there's the stripped and deconstructed version of "Alone Together," and two quintet tracks, with twin tenor saxes for the hard bop number "L.N.K. Blues," and the serene, beautiful title cut with tenor and guitar. The interplay between Glasper and bassist Bob Hurst should be simpatico and it is, they've played together a lot, while Damion Reed more than holds up his end on drums in a sensitive manner. All in all, a fine first offering with loads of potential. In a way, Glasper is in many ways reinventing the piano trio aesthetic, and time will tell whether it wears well and progresses."