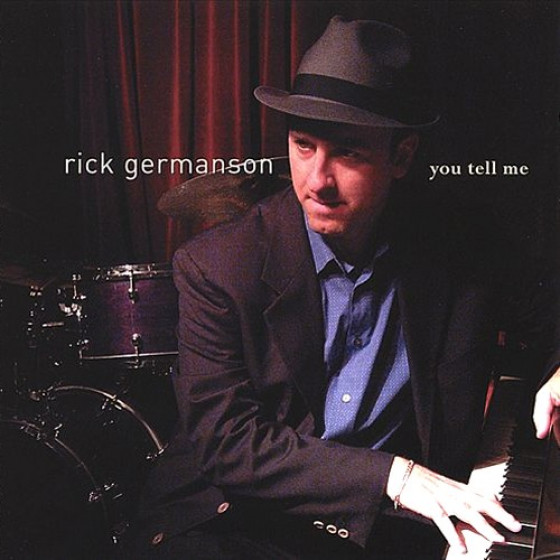 You Tell Me is Rick Germanson's second leader album on Fresh Sound New Talent. Pianist Rick Germanson has been in demand as a sideman in NYC for a few years now. Here he makes his exciting new recording as a leader with trio. He says, "For my sophomore release I decided to go with the standard piano trio format. There is three way connection with this particular trio. Gerald Cannon and I have been playing together for a decade and Ralph Peterson and I four years. Gerald and I have worked together in various contexts, most notably in groups led by such jazz heroes as Slide Hampton, Louis Hayes, and the late Elvin Jones. I play piano on Gerald's self-titled debut CD. Ralph and I appear on trumpeter Jeremy Pelt's CD "Insight" (FSNT 127) and have also worked in saxophonist Craig Andy's Quintet. I have performed several gigs as a member of Ralph's Quintet as well. All three members of the trio provide the rhythm section work on saxophonist Wayne Escoffrey's CD "Intuition". Fittingly, there was no rehearsal and the recording was done in a mere four hours. As Ralph said at the conclusion of the date: "We did it the way you're supposed to do it!".

"Pianist Rick Germanson was named one of AAJ-NYs Best New Talents of 2004. If there were any questions as to why, You Tell Me should help answer them. Germansons sophomore recording is a solid piano trio outing in which he peppers his original compositions with a few lesser-played standards, mixing ballads and a fine blues with the uptempo tracks.
As a pianist, Germanson uses traditional voicings and textures, but its apparent that hes studied and absorbed that tradition deeply, so that his ideas come out effortlessly and naturally in his own voice. In the Cut is the original blues on the album, a good composition whose theme is heavily (and trickily) syncopated and which uses some interesting substitutions for the traditional twelve-bar blues chord progression.
Germansons technique can be eyebrow-raising, as in some of the runs up and down the keyboard in Theme for Eliot (written for his son), but it is evidence of his taste that he doesnt exhibit such flashiness at every opportunity.
A high point of the album comes with the sixth track, a cover of It Was A Very Good Year. Its hard not to hear Frank Sinatras voice in ones head when Germanson states the classic melody, but the pieces brisk tempo, together with Ralph Petersons dynamic cymbals-and-rims drumming and Germansons harmonies, firmly fixes the pianists stamp on this one.
To close the set, Germanson offers a gorgeous solo piano take on Mel Tormes Born to Be Blue, full of big, lush chords and given an easy stride pacing."
- Brian P. Lonergan, All About Jazz

"With You Tell Me, Rick Germanson has created an immensely satisfying piano trio album in which the musicians engage the compositions, and each other, with mature dialogue, wit, and extroverted passion. To top it off, the music swings like crazy.
Germanson exhibits a roiling swing and a steady flow of solid ideas. He favors dense chord voicings, coupled with a scampering right hand, and his overall approach bears a superficial resemblance to that of McCoy Tyner or Kenny Barron. But Germanson likes to improvise with unpredictable phrasing, using some short phrases and riffs to build tension. And amid the urgency of his playing, it also has a joyous quality. Germanson obviously loves to play and he loves to swing.
The momentum of the piano solos is enhanced by Gerald Cannon's deep bass groove and Ralph Peterson's superlative drumming. Cannon's deep, woody sound and in-the-pocket walking are invaluable to the success of this music, and he locks in with his bandmates most effectively. His solos are excellent, and of course, he swings hard. Peterson is simply spectacular. He sets off fireworks, constantly pushing the music forward, and playing dense polyrhythms that swirl around the groove without ever detracting from it. He can follow Germanson's lead, or he can engage in complex, creative crosstalk with both Germanson and Cannon. And his brushwork is exquisite, particularly on Dance Of The Forgotten.
Besides the strong playing by all hands, You Tell Me benefits from Germanson's inventive compositions. Entropy, for example, is an uptempo cooker with a catchy melody. In The Cut is a solidly grooving blues. Dance Of The Forgotten is another cooker, a waltz with knotty harmonies and the rich chordal voicings in which Germanson maneuvers so adroitly. With its superior improvising, impressive selection of tunes, often compelling sense of interplay, and hard and happy swing, You Tell Me has it all."
- Marc Meyers, All About Jazz