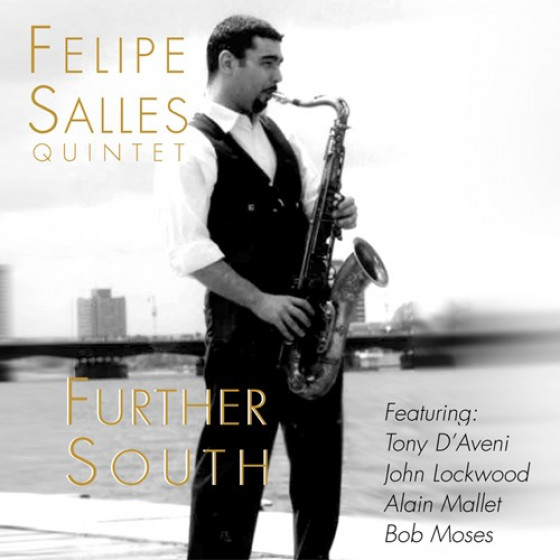 Felipe Salles, a young and talented Brazilian saxophonist currently living in New York, was the winner of the Bienal SGAE Jazz Tete Montoliu, 2001. On his debut album, Further South, he presents us with an unique sound through his playing and writing, the result of a tasteful blend of Brazilian rhythms, odd meters, modern jazz harmonies and colorful instrumentation.

"Felipe Salles was born in Sao Paulo, Brazil and like jazz musicians who have gone before him have fused together the north and south American jazz elements into one pulsating debut album entitled 'Further South'.

As soon as I read the liner notes and learned he was from Brazil I expected to hear lots of bossa beats but the music is more mainstream like his fellow countryman Hector Costita ( who could forget the wonderful album '1981' featuring the killer cut 'Lou')
Felipe had a sound pedigree in jazz whilst in Brazil playing with Octeto de Musica Brasileira, Zerro Santos Big Band, Banda Farinha Seca, Zydeco Band, Santa Gafieira, Sampa Crew, Savoy Quartet and the Axel Fisch Group He has performed with Brazilian artists such as Daniela Mercury, Paulo Moura and Wagner Tiso.

This foundation led him to Boston to earn a masters degree and then in 1995 to New York City where he grounded the Felipe Salles Quintet and plays in many mainstream venues in the Big Apple and other major USA cities.

His debut album is bursting with energy and fabulous playing, based on a tight combo featuring reknowned multi-instrumentalist Bob Moses, this time playing on drums and John Lockwood on bass, Felipe interplays with trumpetman Tony D'Aveni and pianist Alain Mallet.

The material is all written and produced by Felipe with the exception of Charles Mingus' 'Duke Ellington's Sound of Love' and there are few clues in the compositions to suggest from where he originated. The Branford Marsalis and Freddie Hubbard type sound of their respective instruments sound like true-blue American Chicago or New York jazz.

There were a few occasions when I could hear a Cuban influence in the music and the close harmony playing of the soprano sax and trombone on 'To whom it may concern' and almost salsa piano playing do provide some clues to the author's origins.

There are some wonderful moments for me on this album when musical expression blossoms and stuns the listener into a blissful sojourn, rather like an artist painting a brush stroke and standing back to see the addition in context to the overall image like the beautiful 'Duke Ellington's Sound of Love'. Felipe and his fellow band members have a solid jazz album here which will appeal to mainstreamers and 'live jazz' goers. The set includes all that is great in jazz, masterful playing, good delivery and thoughtful and intelligent arrangements."

- By Wes Gillespie for 'The Jazz Site', but also writes reviews for All That Jazz, The Brazilian Music Review, Sony Jazz and hosts the Sony Jazz Europe website.

"Further South, the debut CD by Saxophonist Felipe Salles is keeper. It has enough variety of tone and texture to relax you to bonelessness one minute and have you snapping your fingers the next. It could be the underscore of one of those romantic European art films.
Salles came from Brazil to study at the New England Conservatory of music. Since 1994 he has been performing in the Boston area and earning a Master's Degree and Graduate Diploma. All the songs on his debut CD are his own except the Mingus Ballad dedicated to Duke Ellington. Some of the compositions are personally inspired: "The Cage an almost progressive sounding cut, concerns Felipe's adjustment to American culture; While the in the forlorn "I Can See You From Here" the saxophone alternately whines and comforts in a lullaby voiced to his friends and family back home.

Felipe's tone on tenor is mellow and rich and he doesn't mind dipping into the historical legacy on the Sound of Love. The musicians feature the spirited trumpeter Tony d'Aveni, Pianist Alain Mallet, and the drum/bass team of Bob Moses and John Lockwood.

The first cut, "Triad Again" is smooth and wistful, yet adventurous. It's like an abstract painting with high trumpeting passages and mellow improvisation. Cut seven, "Noite a Dentro" has a mysterious quality like a night journey when you don't know where you might end up. The title cut "Further South", has its Latin influences, but there's more; the counterpoint of melody and bass line is hypnotic and perhaps a little edgy, before it settles back into more traditional rhythms. Altogether there's definitely variety her and it's all good!"

"Its always refreshing to witness the emergence of new and vibrant talent. Such is the case with saxophonist Felipe Salles new cd Further South. A native of Sao Paulo, Brazil, Salles now lives and performs in the thriving jazz scene of New York. His tenor voice is strong and skillful. His sound is reminiscent of other purveyors of the pervasive saxophone, but its his style and more importantly his writing and arranging skills that illuminates his new recording. Simply put, Salles is a very creative and talented musician. When differentiating between the masses of other talented sax players in todays jazz scene, its easy to overlook some of the subtle nuances in terms of arrangement and composition. Salles contains an approach that is full of creativity and energy.

Theres the usual bop, swing, and blues elemental in the initial selection Triad Again, but things really take flight on The Cage which opens with a moody bow and reed intro and then blossoms into a groove oriented melody. The next selection is the beautiful and airy I Can See You From Here with memorable solos from flugelhorn, sax, and piano. Salles quintet is extremely talented and cohesive, with ample room to display their skills and voices. Each selection is unique and shows great range and depth. The horn arrangements are well thought out, and show complexity, on the contagious composition Noite a Dentro. Theres the quirky and unique Carlas Tango with its odd timing that demonstrates the strong group dynamic of the quintet. With excellent musicianship from all participants and the unique style and inventive voice of Felipe Salles; this is straight up good jazz. Recommended."

- Mark F. Turner, All About Jazz