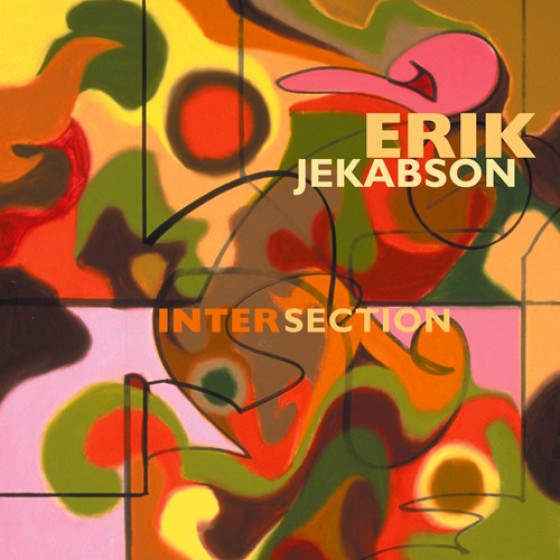 Erik just moved to San Francisco in July 2003 after spending the last five years in Brooklyn, New York. While living in New York, his main projects were playing with the Howard Fishman Quartet and working on his own compositions and groups. The quintet, consisting of trumpet, tenor sax, guitar, bass and drums, explores the modern jazz format

"Like many of his compadres on the Spanish FSNT imprint, trumpeter Erik Jekabson not only sports playing chops but writing and arranging acumen. The Berkeley, California native has spent the last five years in New York, where he's worked with the Illinois Jacquet and Woody Herman Big Bands, and the Howard Fishman Quartet.

'On The Move' begins with the leader's trumpet and Matt Otto's tenor weaving lushly around each other over swinging drums until acoustic bass and electric guitar provide a slightly overlapping, quickly alternating, great little two-note motif. The motif supports the melody, voiced in tandem by trumpet and tenor, setting up a walking bass section that slows through a lope under a stretched out melody line, back to the guitar-bass motif. Where walking bass should return, it drops out under Jekabsons first solo section, beginning with Latin allusion, progressing to bop illusion, hinting at reservoirs of facility only reservedly displayed. Stabs of rhythm guitar facilitate the handoff to Otto, who picks up the ball with Turrentinelike grit and breathiness, effortlessly navigating the changes with just the right concentration of notes. Drummer Mark Ferber breaks it down under that returning motif, as bass man and producer Alex Cuadrado returns to drive the swing section of the melody home.

One of the world's finest handful of guitarists is along for this ride-Ben
Monder. Here he plays, for him, the unusual role of master straight-ahead bop guitarist, something he does as well or better than any player today. These ears hear only Kurt Rosenwinkel and Adam Rogers as his generational peers in this milieu, but for Ben, bop forms comprise a mere solar system in his sweeping galaxy as a player-I'll leave the comparisons at that.

The title cut ideally lays Ben's brilliance bare. This superlative composition begins with John Ellis' plaintive ocarina, then Ben setting up a single-note, real-time sequence for Ellis' tenor and Jekabsons trumpet to interlace lines against and through. Cuadrado enters the fray, somehow weaving his line into a now-unified, gently swinging canvas that deconstructs slightly before beginning a loping, open section for Jekabsen's solo. The interaction between the trumpet line and Monders letter-perfect, but loose, comping is notable here before his guitar takes the floor. At first, horns dance under him, to which he reacts with complementary, never repeating, motif. But when the horns drop out, Ben goes scintillatingly linear, to the point that even fans who know his work will be pleasantly surprised. Heres a great example of yet another intriguing element of the contemporary jazz world; that is, when a players participation in a date provides context that catalyzes revelation of optimum capabilities. In other words, Ben all-too-rarely has taken opportunity to rip as cleanly and as liberally as he does here, and again on 'Invigoration,' first dancing sparsely before breaking into a full-on sprint over this new take on a classic, jazz-waltz composition.

Theres a lot to delve into, including the Sketches of Spain evocations of
'You Go to My Head,' 'The Rising' and 'Farewell,' the latter of which
imparts a feeling of meditatively revolving in introspection. 'Farewell'
finds Monder following his instincts to create a new improvisation, a new
song over an undulating single-note bass pulse.

Jekabson has handpicked a great unit to realize his considerable writing and arranging skills, turning in another winning FSNT debut - a provocative take on the jazz tradition, rooted in straight-ahead, elegant, small-group work."