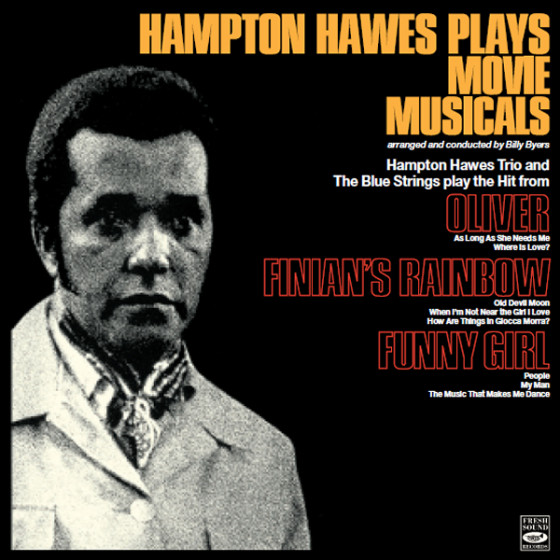 "Throughout his career [Hampton Hawes], a restless man constantly engaged in a search for self-improvement, has expanded his scope, finding new ways to voice chords, and new songs to enlarge his repertoire.

Long before it became fashionable for jazz musicians to record albums of Broadway hits, Hamp expressed his enthusiasm for show tunes, in which he found a whole new world of material. In 1966 he cut a trio album for Contemporary, comprising mostly hits from movies and Broadway shows.

His debut album for Vault, however, is different in concept from any of his previous LPs. The selection of Billy Byers to provide the string backgrounds could not have been more felicitous. To round cut the group, Hamp had Bob West on bass and Larry Bunker on drums. West, rapidly gaining recognition as one of the most versatile bassists on the studio and night club. Bunker, of course, is a percussionist for all reasons and seasons."

—Leonard Feather, 1969 (Taken from the inside liner notes)

"This CD reissues one of pianist Hampton Hawes' more obscure sessions. Trying during the era to widen his repertoire beyond the usual bop standards, Hawes performs eight songs originally written for movies. Some of the tunes, such as "My Man" and "Old Devil Moon," are of a higher quality than others ("People" and "As Long As She Needs Me"). For the set, Hawes was joined not only by bassist Bob West and drummer Larry Bunker, but also a string section arranged by Billy Byers. Formerly available as half of the LP The Two Sides of Hampton Hawes, this interesting but very brief (under 29 minutes) and far from essential outing has been reissued on CD by Fresh Sound."