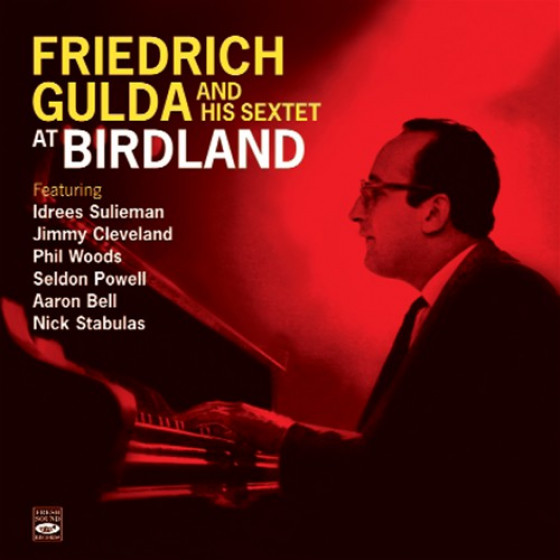 In June 1956, for the first time in the history of jazz and/or classical music, Friedrich Gulda, the world-renowned classical piano virtuoso, was booked into a jazz club when he led led a jazz unit on a two-week engagement at the famous Birdland. He was 26.

Jazz aficionado and producer John Hammond helped him put together an excellent group with a first-rate front line of the superb Birdinspired alto of Phil Woods, the supple, full-toned swing of tenor Seldon Powell, the virtuosic eloquence of trombonist Jimmy Cleveland and, in fine form, the veteran modernist Idrees Sulieman on trumpet. Bassist Aaron Bell and drummer Nick Stabulas were solidly effective rhythm section partners for Gulda, and the groups collective empathy was remarkable on a programme of standards and the pianists originals.

Gulda, who had little time to pay his jazz dues, played in a fluent modern jazz idiom. He was relaxed and professional, and knowledgeable, sensitive and respectful of the jazz language, disdaining the application of the pyrotechnical technique for which he was acclaimed. And there was no hint of the jazz-classical fusion fad of the time; just taste, judgement and class.

"Friedrich Gulda was a classical pianist of international stature who, following a meeting with Dizzy Gillespie in 1951, embarked on an attachment with jazz. This eventually led to his first regular American appearance at Birdland in New York City in 1956 which has been captured in this Fresh Sounds reissue.

The impresario John Hammond was the driving force behind this Birdland session which was originally released on two 12" albums, the first by RCA Victor entitled Friedrich Gulda At Birdland and the second by Decca called A Man Of Letters. Hammond was fully aware that, while there might be some curiosity value in such an appearance by a classically trained pianist, he needed to ensure that Gulda had the opportunity to succeed and thus he put together a front line that was supportive and collaborative. The bassist and drummer were also known for their swing and steady timekeeping. The song set was a combination of Gulda original compositions and "head" arrangements of popular and jazz standards designed to engage the audience.

Now while it is accurate to say that all the tracks were recorded at Birdland, not all of them were performed live. All nine Gulda compositions were recorded in the afternoon without an audience, much like a recording studio, and the other five jazz-oriented tunes were done with an audience during the evening sessions. The Gulda compositions are intricately constructed with a chamber jazz feel but allow space for solos by the members of the band. Dark Glow is a sensuous ballad designed to showcase the creative alto sax of Phil Woods. Another piece in the same vein is Cool Hill which has a modelled structure for Woods to shine. Seldon Powell's cool tenor sax is prominently featured on Air From Other Planets.

The real goodies on this disc are the live tracks from Birdland and all are swingers. The first substantive taste of Gulda's pianistic style shows up on a trio version of A Night In Tunisia. With Aaron Bell on bass and Nick Stabulas on drums, Gulda romps through the tune with strong single-note phrasing in a Bud Powell mode, but with a percussive note-striking style reminiscent of Eddie Costa. An extended version of Bernie's Tune has all the elements of a jam session, with strong choruses from all members of the band. Out Of Nowhere becomes a vehicle for trombonist Jimmy Cleveland where his creative and enthusiastic offerings are fully evident. Idrees Sulieman, a somewhat under-appreciated trumpeter, shows that he deserves more attention with some fine soloing on All The Things You Are.

Finally the George Shearing classic Lullaby Of Birdland allows Gulda to take a block-chord Shearingesque attack on this signature tune.

This is an interesting and noteworthy addition to any record collection.

"Friedrich Gulda first made his mark in the world of classical music before making the first of many excursions into jazz. This 1956 date at the original Birdland in New York City features the pianist with some well-chosen sidemen: alto saxophonist Phil Woods, tenor saxophonist Seldon Powell, trumpeter Idrees Sulieman, trombonist Jimmy Cleveland, bassist Aaron Bell, and drummer Nick Stabulas. Gulda's originals dominate the set, including the cool ballad "Dark Glow" and several strident bop numbers ("Scruby," "Dodo," and "New Shoes"); his septet also romps through "A Night in Tunisia" and "Bernie's Tune."

The assertion that Gulda might be "the greatest piano virtuoso to emerge in the last ten years" is a bit of liner note hyperbole by John Hammond; Gulda is more than adequate but not worthy of comparison to any of the major jazz pianists active at the time of this recording. He does give his sidemen plenty of solo space, and Woods easily takes top solo honors for the evening. One amusing moment is the infamous midget Birdland MC Pee Wee Marquette's mispronunciation of Gulda's first name as "Frederick"; it can be safely assumed that the pianist forgot to tip him ahead of time, based on Marquette's legendary hustling of musicians appearing at the club. Long out of print, this LP has enough interesting moments to make it a worthwhile investment for fans of 1950s bop and cool jazz."