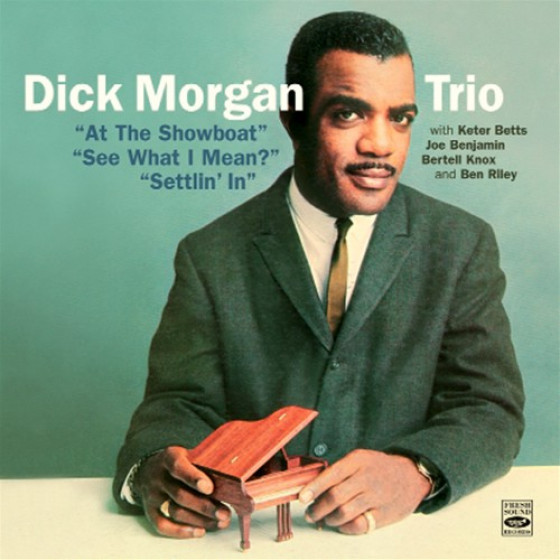 When Dick Morgan emerged on the jazz scene in 1960, he was already a fluent and richly soulful young pianist who named Oscar Peterson and Erroll Garner as primary inspirations. Impressed with his talent when he heard him at the Showboat in Washington DC, Julian Cannonball Adderley set up his first recording on the Riverside label.

This set includes the three albums he recorded for Riverside, At The Showboat, See What I Mean?, and Settlin In, where he transformed some standards and originals into blues-drenched personal messages, flavoured with elements of Wynton Kelly and Red Garland. It was a notable amalgam and with it he subsequently and gradually built a loyal and responsive audience, finding his best and most characteristic groove - a wonderfully compelling manner, strong, swinging, melodic and earthy. Not for nothing - today he is the 81-year-old dean of Washington DC jazz piano.

Personnel on "At the Showboat":


Personnel on "Settlin In":

"Pianist Dick Morgan might have been better known had he not opted to base himself in Washington. It was there that Cannonball Adderley heard him and recommended Orrin Keepnews at Riverside to give him a break. The outcome was the three albums collected here. They are very good, too, but were simply overlooked in the tidal wave of jazz releases in the early 1960s.

With a liking for Peterson, Garner, Kelly and Garland, Morgan had technique to spare, but that ability was tempered by good taste. His regular trio, with the superb Keeter Betts on bass, recorded both the (1) and (2) material. The (1) date has the immediacy and presence of a live recording. The audience response shows how much the locals enjoyed the groups easy swinging concept. The studio date six months later is more prosaic and measured, but includes well-considered performances of standards, jazz and otherwise.

For the third session, bassist Joe Benjamin and drummer Ben Riley were recruited, and their experience ensured another Iistenable recital and on a much better sounding instrument than Morgan was afforded on the earlier outings. There are telling interpretations of Mr Wonderful, Take The 'A' Train and Ill Take Romance which suggest that Morgan deserved further opportunities to set out his stall.

However, in a highly competitive market, Dick was just one of many strivers and he returned to Washington where, now in his 80s, he is still a revered musical figure. This compilation is yet another invaluable archive document from Fresh Sound, a label which constantly reminds us of neglected talents, especially in the piano division. These two CDs tell you all you need to know about Dick Morgan, and it's all of interest and worth hearing."

As far as under appreciated pianists goes, start right here with Dick Morgan. He dropped out of sight after these three records from 60-61, and resurfaced in the 90s only to go back underground. What weve got here is a guy who leads a trio (with Keter Betts/b-Joe Benjamin/b and Bertell Knox/dr-Ben Riley/dr) and has a touch that gives a tip of the hat to Ahmad Jamal, Red Garland and Wynton Kelly. His session At The Showboat will make you think its Jamal At The Pershing, as that wonderful sense of rhythm and timing is in abundance here, as well as a terrific sense of swing. A piece like The Gypsy in my Soul or a honkin blues like Big Fat Mama deliver eight digits of delight. The pair of studio albums display a glassy touch with Lil Darlin and When Lights Are Low tender mercies. Youll going to LOVE this guy!"