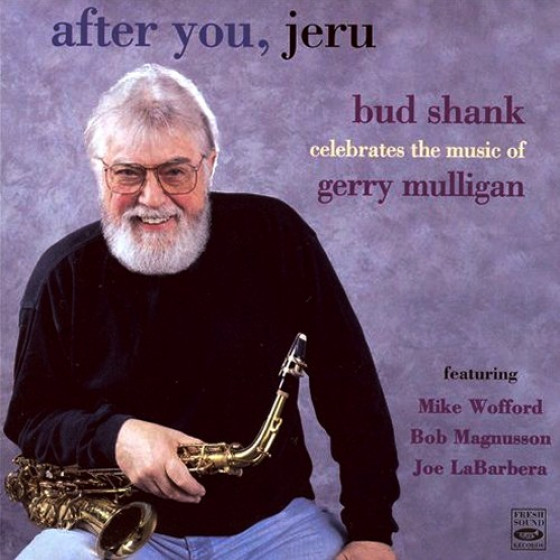 After You, Jeru · Bud Shank Celebrates the Music of Gerry Mulligan

All composition written by Gerry Mulligan, except #3 co-written with Zoot Sims. Track #12 is a composition of Bud Shank

"Bud Shank's tribute to the late Gerry Mulligan is a brilliant follow-up to his earlier Fresh Sound CD saluting Bill Evans. Once again joined by pianist Mike Wofford, bassist Bob Magnusson, and drummer Joe La Barbera, the alto saxophonist explores music from throughout Mulligan's long career, most of which was composed by the late baritone saxophonist. "Idol Gossip," which is based upon the chord changes to "Bernie's Tune" (an early hit for Mulligan composed by Bernie Miller), is a superb opener, with Shank's brash playing and Magnusson's tasty bass solo. Shank's sassy take of the ballad "Song for Strayhorn" may be less melodic than the composer's recording of it, but it works very well. The buoyant "Rico Apollo," composed late in Mulligan's career, is a bit of a hoedown with some down-home piano by Wofford. Mulligan wrote "O Great Spirit" near the end of his life and didn't record it, but Shank's powerful performance should bring it the attention it deserves. "After You, Jeru" is Shank's own, a bittersweet ballad protesting the premature death of his good friend Gerry Mulligan. Not only is there a generous helping of great music, clocking in at almost 77 minutes, but the detailed liner notes and remembrances by several writers, along with photos and the program from Mulligan's memorial service, add to the value of this very rewarding CD."