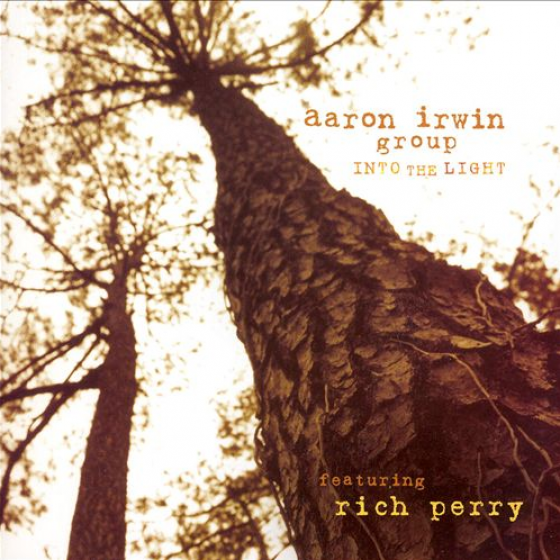 New Yorker Magazine rated Into the Light (along with nine others) as one of the best jazz albums of 2006!

Still only twenty-eight years old, saxophonist Aaron Irwin has already amassed an impressive resume. He has recorded commissioned work by Maria Schneider, performed on a live disc with Tom Harrell, toured with the Tommy Dorsey Big Band, and played with a wide range of artists, including Joe Lovano, Dave Liebman and Nicholas Payton. Recipient of many awards, including a number of Downbeat magazine awards for outstanding performance, he now resides in New York City, where he is active as an educator and performer. After his album Wide Awake, which included Cheeky, an homage to the Fresh Sound New Talent reminiscent artist Chris Cheek, he recorded at last his second album Into the Light for the Barcelonan label.

"Jordi Pujol, who manages FSNT, has a real knack for finding talented players and giving them a chance to record. Into The Light only further demonstrates his sensibilities. Still shy of thirty, Aaron Irwin has very mature musical instincts and an eclectic taste, with playing that is rhythmically quite free and unpredictable and compositions with a broad stylistic range.

In addition to the leader's alto saxophone, the Aaron Irwin group is made up of guitarist Ryan Scott, bassist Matt Clohesy and drummer Greg Ritchie, with Rich Perry guesting on this album. Perry is a well-known educator at the Eastman School and a prolific recording artist on SteepleChase and other labels. Ritchie has recorded with David Aaron and Steve Amirault.

What makes Into The Light so enjoyable is that while the music cannot be called challenging, the arrangements and the playing create stories with a forward energy, rather than just consisting of blowing. The rhythmic pulse comes and goes, different players come forward, and in general they avoid the head-solo-solo-recap structure.

Irwin and Perry play against each other a lot, as in the unique arrangement of Jerome Kerns All The Things You Are or Cole Porters So In Love. As they allow their ranges to cross, it can be hard to determine who is actually playing, perhaps reflecting on Irwins maturity.

Aside from the two tunes mentioned above and Ugly Beauty by Thelonious Monk, the five other tracks are Irwin compositions. Title tunes usually have a special significance for the composer, and Into The Light shows some of the workings of Irwins composing and arranging techniques. The melody itself, played in unison with Perry, has a very clear melodic, rhythmic and harmonic structure, which could easily become predictable. However, after the declamation, the players, each in his own way, take it apartmaking the listening experience interesting as we follow each soloists deconstruction. The ending recap is almost shocking after what transpires in the middle.

Perry, who plays on five of the eight tracks, clearly clicks with Irwin as a player in the band and an interpreter of his compositions. Besides blending marvelously both musically and emotionally on the two standards, his emotionality on Irwins abstract The Point sounds totally natural.

The group as a whole has a welcome sound and personality. Even if each member is not immediately distinctive, the overall effort is well above average. Into The Light is not merely an enjoyable listen, but an engaging one."

Budd Kopman -All About Jazz

"The world is moving at an increasingly rapid pace, so its not surprising that the impact of influential artists can be heard more immediately. New York-based altoist Aaron Irwin demonstrated plenty of promise with his independently released 2004 debut, Wide Awake. The mature approach to improvisation that belied his young age is still present on Into the Light, but so too is the need to wear his influences a little less vividly on his sleeve.

With guitarist Ryan Scott mining Bill Frisell territory and Irwin opening the disc with a deconstructive approach to All the Things You Are, the reference to drummer Paul Motians longstanding trio with Frisell and saxophonist Joe Lovano is perhaps a little too obvious. Still, in a full quartet featuring bassist Matt Clohesy and drummer Greg Ritchie, Irwin remains reverential rather than solely imitative.

Ritchies light and textural approach may speak of Motian, but hes also more direct on tunes like Irwins Fumesone of five to also feature guest Rich Perry on tenor. Scotts tone is warm but not as densly lush as Frisells; when he adds distortion to the mix, he adopts a darker tone. Still, his accompaniment to Irwins muscular yet lyrical solo bears Frisells laconic signature, long tones resonating as he layers other notes to build shifting chords that navigate Irwins changes. The ethereal sustained chords that support Irwins gentle and slightly folksy In the 90s are even closer to Frisells arpeggiated approach, but less idiosyncratically so.

The title track moves between a modern bop-like theme and solo segments that break down into alto and tenor duets with Clohesy. Perry works well with Irwin, especially on Cole Porters So in Love, where the two introduce the tune unaccompanied, winding their way around the familiar theme so that when first Clohesy, then Ritchie and Scott enter, a collaborative take is already firmly established. The same approach applies to Irwins rubato The Point though, in this case, everyones in the pool at once.

Irwin is the sole horn on The Anti-Hero, where a bass-held pedal tone leads into a rocky B section that, once the solos begin, provides the basis for Scotts effected and whammy barred lead. The album closes with a relatively under-covered Thelonious Monk tune, Ugly Beauty, featuring a melodic spot from Clohesy and Irwins thematic approach to building solos that remain connected to the core of the song.

An enjoyable sophomore effort, Into the Light reveals clear progress for Irwin, both as a writer and an improviser. His disposition towards distinctive melodism is evolving, but hell still need to find a way to assert his personality more assertively if he wants to rise above the pack."

John Kelman -All About Jazz

"Altoist Aaron Irwin's Into The Light is a particularly intriguing set. On some selections Ryan Scott's guitar sounds a bit like Bill Frisell (no easy task), making the group seem a bit like the Paul Motian Trio with Frisell and Joe Lovano despite the inclusion of bass. Occasionally the interplay between Irwin and tenor-saxophonist Rick Perry (who is on five of the eight numbers) is reminiscent of Lee Konitz and Warne Marsh, particularly on "So In Love." But much of the time the performances are quite original. Whether floating out-of-tempo or swinging hard, Irwin's music (he contributed five of the eight selections) is full of surprises and is consistently unpredictable. This CD grows in interest with each listen and is highly recommended."