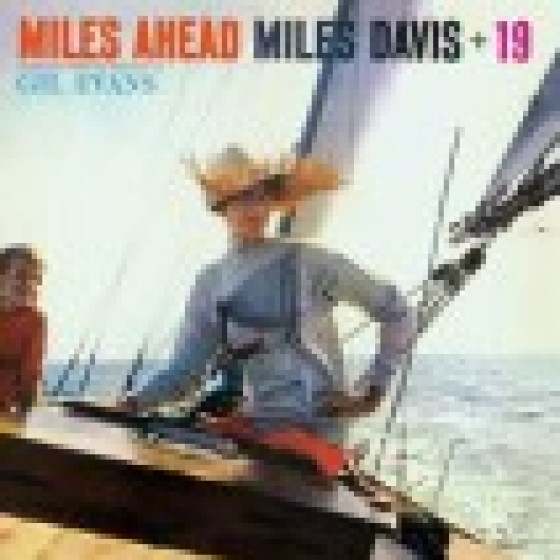 Two complete original albums, the successful interplay between Miles Davis and Gil Evans issued on LP as Miles Ahead, along with Blue Moods, an introspective LP made by Miles with a quintet featuring Charles Mingus and Elvin Jones.

Although Miles Ahead was his first recording with the Gil Evans Orchestra, it was certainly not Evans and Davis' first collaboration. They had known each other since the mid-forties and were the architects behind Birth of the Cool and had recorded live from the Royal Roost in New York and in the studio.

"Miles Ahead" was a completely refined product in which the arrangements, the repertoire and the mood of every improvisation were carefully selected. This edition utilizes the original album cover, not frequently seen because Miles himself ordered it changed after the initial print.

"Miles Ahead is an extraordinarily well done album with absolutely no point at which you can wish for more. Miles' solos throughout have an almost ascetic purity about them. They are deliberate unhurried, and almost inevitable in their time. On Miles Ahead he comes bouncing and skipping in almost as through he were the legendary Piper, dancing his way along leading everyone."


"This album is perhaps most significant for the process it set in motion -the collaboration between Gil Evans and Miles Davis that would produce Porgy and Bess and Sketches of Spain, two of Davis' best albums. That said, this album is a miracle in itself, the result of a big gamble on the part of Columbia Records, who put together Evans and Davis, who hadn't worked together since recording the critically admired but commercially unsuccessful sides that would later be issued as The Birth of the Cool. Columbia also allowed Evans to assemble a 19-piece band for the recordings, at a time when big bands were far out of fashion and also at a time when the resulting recordings could not be released until two years in the future (because of Davis' contractual obligations with Prestige). Davis was also expected to carry the album as its only soloist, and manage not to get lost among a cast of supporting musicians that included a huge horn section. To a large extent, he succeeds. Evans' arrangements in particular are well-suited to the format, and he and Davis formed a deep and close partnership where ideas were swapped back and forth, nurtured, and developed long before they were expressed in the studio. Davis gets off to a great start, with the hyper-kinetic "Springsville," which seems to almost perfectly embody Evans' and Davis' partnership with its light, flexible exchanges between soloist and orchestra. He is strongest on the ballads, though, where his subdued and wistful tone rises high above the hushed accompaniment, especially on "Miles Ahead" and "Blues for Pablo" (which foreshadows the bluesy, Latin-tinged sound of Sketches of Spain). The upbeat "I Don't Want to Be Kissed (By Anyone but You)" is another strong song, but shows the weakness of the format as Davis intersperses a charming, bright, technically challenging solo with a blasting horn section that occasionally buries him. It is a fine end, however, to an album that gave a hint of the greatness that would come as Evans and Davis fine-tuned their partnership over the course of the next several years."

"In the '50s, the party line among New York jazz critics was that hard bop was the "true faith" and that cool jazz was lightweight and unemotional. But Miles Davis knew better. The trumpeter (whose Birth of the Cool sessions of 1949-1950 proved to be incredibly influential) was smart enough to realize that cool jazz and hard bop were equally valid parts of the house that Charlie Parker built, and he had no problem working with cool jazzmen one minute and hard boppers the next. Recorded for Charles Mingus' Debut label in 1955, Blue Moods is an excellent example of cool jazz. However, not all of the musicians who join Davis on this album were full-time members of jazz's cool school. Although vibist Teddy Charles was cool-oriented, Mingus (upright bass) and Elvin Jones (drums) were never considered cool players and the lyrical trombonist Britt Woodman was, in the '50s, best known for his association with Duke Ellington. Nonetheless, the things that characterized cool jazz subtlety, restraint, and understatement characterize Blue Moods. Mingus and Jones were certainly capable of being forceful and aggressive, but you won't hear them being intense on this disc; a very laid-back, gently introspective approach prevails on interpretations of "Easy Living," "Alone Together," "Nature Boy," and "There's No You." Clocking in at 27 minutes, Blue Moods is quite skimpy by most standards unfortunately, Fantasy didn't have any alternate takes to add. But even so, Blue Moods offers considerable rewards to those who have a taste for '50s cool jazz."