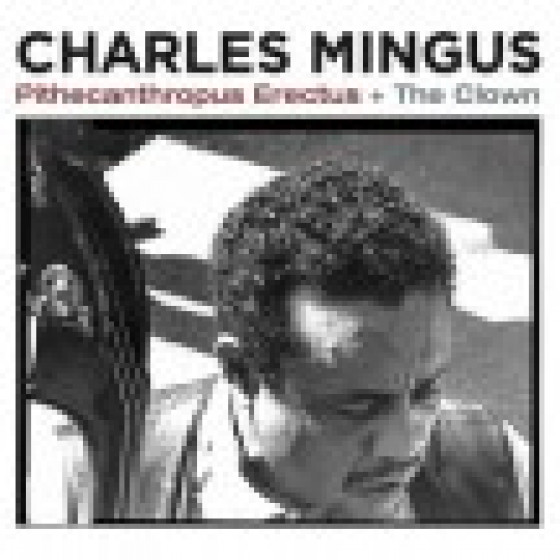 This CD release presents two of Charles Mingus most celebrated albums in their entirety: "Pithecanthropus Erectus" and "The Clown". All but one of the songs included here were original compositions by Mingus. These sides feature first class soloist like Jackie McLean, Jimmy Knepper, J.R. Monterose and Mal Waldron.

All compositions by Charles Mingus except "A Foggy Day" (Gershwin-Gershwin).

"Pithecanthropus Erectus was Charles Mingus' breakthrough as a leader, the album where he established himself as a composer of boundless imagination and a fresh new voice that, despite his ambitiously modern concepts, was firmly grounded in jazz tradition. Mingus truly discovered himself after mastering the vocabularies of bop and swing, and with Pithecanthropus Erectus he began seeking new ways to increase the evocative power of the art form and challenge his musicians (who here include altoist Jackie McLean and pianist Mal Waldron) to work outside of convention. The title cut is one of his greatest masterpieces: a four-movement tone poem depicting man's evolution from pride and accomplishment to hubris and slavery and finally to ultimate destruction. The piece is held together by a haunting, repeated theme and broken up by frenetic, sound-effect-filled interludes that grow darker as man's spirit sinks lower. It can be a little hard to follow the story line, but the whole thing seethes with a brooding intensity that comes from the soloist's extraordinary focus on the mood, rather than simply flashing their chops. Mingus' playful side surfaces on "A Foggy Day (In San Francisco)," which crams numerous sound effects (all from actual instruments) into a highly visual portrait, complete with honking cars, ringing trolleys, sirens, police whistles, change clinking on the sidewalk, and more. This was the first album where Mingus tailored his arrangements to the personalities of his musicians, teaching the pieces by ear instead of writing everything out. Perhaps that's why Pithecanthropus Erectus resembles paintings in sound - full of sumptuous tone colors learned through Duke Ellington, but also rich in sonic details that only could have come from an adventurous modernist. And Mingus plays with the sort of raw passion that comes with the first flush of mastery. Still one of his greatest."

"The Clown was Charles Mingus' second masterpiece in a row, upping the already intense emotional commitment of Pithecanthropus Erectus and burning with righteous anger and frustration. With Pithecanthropus, Mingus displayed a gift for airtight, focused arrangements that nonetheless allowed his players great freedom to add to the established mood of each piece. The Clown refines and heightens that gift; instead of just writing heads that provide launch points for solos, Mingus tries to evoke something specific with every piece, and even his most impressionistic forays have a strong storytelling quality. In fact, The Clown's title cut makes that explicit with a story verbally improvised by Jean Shepherd (yes, the same Jean Shepherd responsible for A Christmas Story) from a predetermined narrative. There are obvious jazz parallels in the clown's descent into bitterness with every unresponsive, mean-spirited audience, but the track is even more interesting for the free improvisations led by trombonist Jimmy Knepper, as the group responds to Shepherd's story and paints an aural backdrop. It's evidence that Mingus' compositional palette was growing more determinedly modern, much like his increasing use of dissonance, sudden tempo changes, and multiple sections. The Clown introduced two of Mingus' finest compositions in the driving, determined "Haitian Fight Song" and the '40s-flavored "Reincarnation of a Lovebird," a peaceful but melancholy tribute to Charlie Parker; Mingus would return to both throughout his career. And, more than just composing and arranging, Mingus also begins to take more of the spotlight as a soloist; in particular, his unaccompanied sections on "Haitian Fight Song" make it one of his fieriest moments ever. Mingus may have matched the urgency of The Clown on later albums, but he never quite exceeded it."

"There are relatively few bassists who can produce such melodic feeling. Its as if, in Mingus hands, the instrument is capable of producing a melodic flow rather than a succession of plucked notes in a melodic pattern."