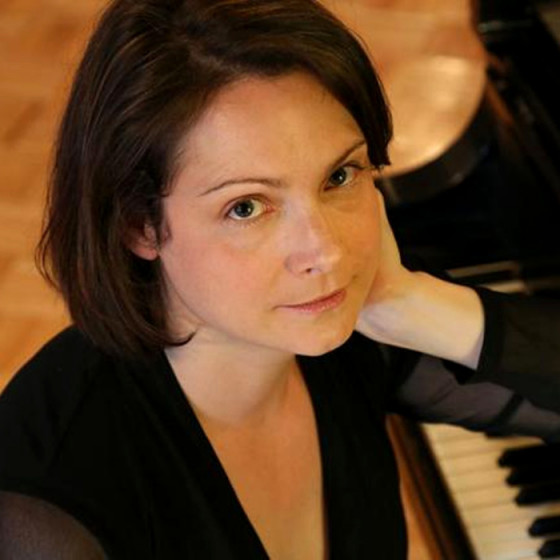 As a leader, collaborator, or sideman, Kris Davis has emerged as one of the most innovative and singular pianists on New York's creative jazz scene of the 21st century. Davis is highly disciplined and often applies rigorous standards and approaches her music from angles that are truly unique (for example, deciding to entirely dispense with chords in favor of lines). This was clear from her acclaimed leader debut, 2004's "Lifespan." Influenced by modern classical and jazz masters alike, she draws liberally from György Ligeti, Luciano Berio, and Morton Feldman, as well as Thelonious Monk, Cecil Taylor, Herbie Hancock, and Keith Jarrett, as evidenced by her solo offering "Aeriol Piano" in 2011. Davis has also been known to explore areas where contemporary post-minimalism and creative jazz intersect, evoking the work of minimalist pioneer Steve Reich, as on Octopus, her 2018 duo...

As a leader, collaborator, or sideman, Kris Davis has emerged as one of the most innovative and singular pianists on New York's creative jazz scene of the 21st century. Davis is highly disciplined and often applies rigorous standards and approaches her music from angles that are truly unique (for example, deciding to entirely dispense with chords in favor of lines). This was clear from her acclaimed leader debut, 2004's "Lifespan." Influenced by modern classical and jazz masters alike, she draws liberally from György Ligeti, Luciano Berio, and Morton Feldman, as well as Thelonious Monk, Cecil Taylor, Herbie Hancock, and Keith Jarrett, as evidenced by her solo offering "Aeriol Piano" in 2011. Davis has also been known to explore areas where contemporary post-minimalism and creative jazz intersect, evoking the work of minimalist pioneer Steve Reich, as on Octopus, her 2018 duo recording with Craig Taborn. More collaborative projects arrived with 2020's "Blood Moon" with Ingrid Laubrock, and 2022's "In Common III" with Matthew Stevens and Walter Smith III.

Kris Davis was born in Vancouver, British Columbia and began playing piano when scarcely out of kindergarten. Growing up in Calgary, Alberta, she studied classical piano through Canada's Royal Conservatory of Music before moving eastward to Canada's largest city in 1997, having received a scholarship to attend the University of Toronto. Davis had become acquainted with and interested in jazz as early as junior high -- she was playing in her school's jazz band by the age of 12 -- but Toronto is where she began pursuing music in earnest as she studied with pianists Brian Dickinson and Gary Williamson and performed on the city's jazz scene, leading her own groups or playing in ensembles led by others.

In 1997 and 2000, Davis was back, momentarily, in the familiar territory of Canada's Rocky Mountain region, attending the Banff Centre's summer jazz and creative music program. In this idyllic setting, her interest in creative improvisation was piqued as she met and worked with such artists as drummer Joey Baron and Brooklyn avant-jazz couple saxophonist Tony Malaby and keyboardist Angelica Sanchez. Back east, Davis graduated from the University of Toronto in 2001 and immediately won a grant from the Canada Council for the Arts to study with pianist/composer Jim McNeely in New York City; she moved to New York that year.

Davis began playing in some of New York's most forward-thinking clubs, and by 2003 recorded her debut disc as a leader, Lifespan, in Brooklyn. Released by the Barcelona-based Fresh Sound New Talent label the following year, "Lifespan" was an often spacious and searching creative jazz album featuring the pianist leading a sextet comprising saxophonist Malaby, saxophonist/clarinetist Jason Rigby, trumpeter/flügelhornist Russ Johnson, bassist Eivind Opsvik, and her then-husband Jeff Davis on drums. Fresh Sound New Talent maintained a commitment to Davis over the next several years as her artistic persona came into sharper focus; the imprint released "The Slightest Shift" and "Rye Eclipse," incisive, angular, non-chordal quartet dates featuring the pianist with Malaby, Opsvik, and Jeff Davis, in 2006 and 2008, respectively, followed by "Good Citizen," an acclaimed trio session featuring bassist John Hébert and drummer Tom Rainey, in 2010.

After completing a master's degree in classical composition from the City University of New York, Davis' recognition in the jazz world increased substantially when she was profiled by jazz critic Ben Ratliff as one of four "New Pilots at the Keyboard" in an October 2011 edition of The New York Times; indeed, Davis had truly come into her own as a leading presence in New York City -- and particularly Brooklyn-based -- creative jazz, and the upcoming years would find her exploring new territories for herself and contributing significantly to the projects of other artists on the scene.

The Portuguese Clean Feed label would figure prominently in documenting Davis' music during these years after having released an improvisational album in which she participated, "Fiction Avalanche" by the Ridd Quartet, in 2005. In 2010 the label issued the eponymous debut by the collaborative trio "Paradoxical Frog," featuring Davis, drummer Tyshawn Sorey, and (in her first band after arriving in Brooklyn from London) saxophonist Ingrid Laubrock. Clean Feed released Davis' first solo piano outing, "Aeriol Piano," in 2011, as well as "Three" by the SKM trio of Davis, bassist Michael Bisio, and saxophonist Stephen Gauci, and Tony Malaby's "Novela," a nonet album in which Davis not only played piano but arranged and conducted six Malaby compositions from previous recordings by the saxophonist. Both "Aeriol Piano" and "Novela" were included in a number of major publications' best-of-the-year lists. In 2012, "Paradoxical Frog's" sophomore album, "Union," appeared on Clean Feed, and the following year the imprint released two albums featuring Davis: her own "Capricorn Climber" with the pianist leading a quintet that comprised violist Mat Maneri, saxophonist Laubrock, bassist Trevor Dunn, and drummer Rainey, and "City of Asylum" by the Eric Revis Trio with Davis and drummer Andrew Cyrille collaborating on a session led by bassist Revis.

Meanwhile, Davis continued to expand the boundaries of Brooklyn creative jazz on recordings issued by other labels. Her second solo piano album, "Massive Threads," was released by Thirsty Ear in 2013, and she also appeared that year on the eponymous Skirl Records debut of LARK, a collaborative quartet featuring Davis along with Laubrock, Rainey, and trumpeter Ralph Alessi. Davis is also a member of Ingrid Laubrock's Anti-House, first appearing as a guest on the group's eponymous Intakt label debut in 2010 and then as a full-fledged bandmember on the Intakt release "Strong Place" in 2013. Davis was back on Clean Feed leading her trio with Rainey and Hébert on the 2014 album "Waiting for You to Grow," dedicated to her new son Benjamin. The following year another Davis album arrived on Clean Feed, the unusual and ambitious "Save Your Breath" by her Infrasound Octet, featuring the pianist/composer joined by guitarist Nate Radley (her husband), organist Gary Versace, and drummer Jim Black, plus four clarinetists: Ben Goldberg, Oscar Noriega, Joachim Badenhorst, and Andrew Bishop. That same year, she and trumpeter Ralph Alessi worked with bassist Stephen Davis on "Sugar Blade," and in another trio with Tony Malaby and Nick Fraser for "Too Many Continents." She finished out the year playing in a quartet with Devin Gray, Chris Speed, and Christopher Tordini on the album "RelativE ResonancE."

In September of 2016 she issued "Duopoly," an audio and video package captured live at Sear Sound in New York City during the spring of the previous year. Her alternating sidemen included Tim Berne, Don Byron, Bill Frisell, and Julian Lage. The music, produced by David Breskin, was issued as it was captured on tape, without mixing, editing, or overdubbing. During the rest of the year, Davis appeared with the Sarah Bernstein Quartet, and the Eric Revis Trio. In 2017, with the Borderlands Trio (including Stephan Crump and Eric McPherson) she released "Asteroidea," and played on records by Kristo Rodzevski, Tom Rainey, Dave Douglas, Max Johnson, Revis, and Sam Bardfeld. In 2018, she and Taborn issued the live "Octopus." Davis also played on records by Ingrid Laubrock, Francisco Mela, and Michael Formanek. She contributed the track "Grass and Trees on the Other Side of the Tracks" to the Tzadik collection Winged Serpents: Six Encomiums for Cecil Taylor. The following year she played with Rob Mazurek on his Desert Encrypts, Vol. 1, and released "Diatom Ribbons" under her own name; the album included ten compositions performed by several groups of collaborators that included drummer Terri Lynne Carrington, guitarists Mark Ribot and Nels Cline, vocalist Esperanza Spalding, bassist Trevor Dunn, saxophonists JD Allen and Malaby, vibist Ches Smith, and turntablist Val Jeanty. She collaborated with saxophonist Laubrock for 2020's "Blood Moon" before joining guitarist Matthew Stevens and saxophonist Walter Smith III for 2022's "In Common III."