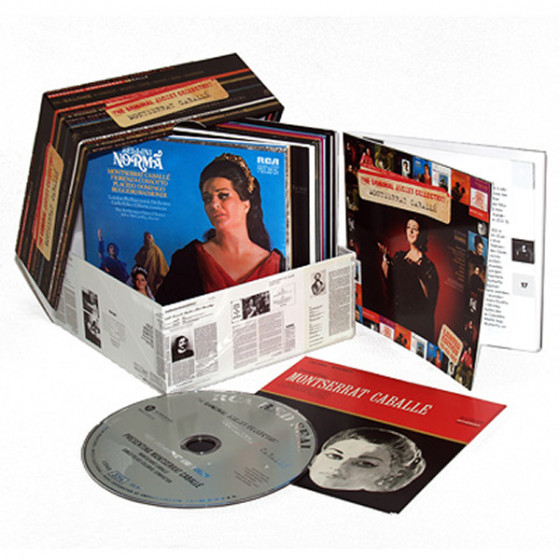 The Spanish vocal virtuoso opera diva, won the Gramophone Lifetime Achievement Award and earned her own 15-disc boxed set, personally compiled by the illustrious soprano herself. The CDs come in facsimile reproductions of the original LP jackets (front and back), and the music originally issued between 1966 and 1971 ranges from Italian arias to German Lieder to complete operas: Bellini's "Norma" and Strauss' "Salome" rarities discs of Verdi, Rossini and Donizetti; a Richard Strauss song recital; a tribute to Enrique Granados; Operatic and Zarzuela duets; arias from Il Parata, Roberto Devereux, Lucrezia Borgia, Maria de Rohan, and many more.

"Some listeners might find the gimmick of “original jackets” sort of foolish, particularly when a) you cannot read the copy on the back if you are older than 15, and b) some of the CDs (taken, of course, from the original LPs) have as little as 40 minutes of music on them and only a couple have more than an hour. But the packaging is slim and nice (taking up the space of about 5 CDs), nostalgia sets in, the enclosed booklet reproduces the original essays (or excerpts from them) and includes track listings if not translations. And the low price for these 15 CDs (under $80.00) makes it very appealing from an entirely different angle.

But nothing is as appealing as Caballé herself. Some singers, regardless of greatness, are difficult to listen to for five, six, seven hours straight. Even with Callas and Pavarotti you might find her intensity and unevenness and his bright tone too much. But with Caballé, particularly at this point in her career (from 1964 to 1972), there’s little problem. Her delivery was so varied, her voice so alluring and with such a suave edge to it, containing so many colors and textures, that she never tires the ear. An overdose of beauty is possible, but she also delivers with great drama and dynamic diversity most of the time, making each selection a special occasion–sometimes sheerly vocal, but mostly far deeper.

These 15 CDs catch her when there was almost nothing she could not sing effectively. On stage she could be lazy–New York audiences called her the world’s greatest last-act soprano, because that was when she would start actually caring and singing out. She often vocalized instead of articulating words, would drop out of ensembles to save her voice, and was known for canceling performances. Here, she is pristine and fascinating.

The first RCA CD is all bel canto and defines the term: long lines, beauty of tone, embellishments for both effect and further definition of text and feeling; you understand why the Carnegie audience went wild over her first aria from Borgia. In the second and third CDs, recorded in 1964 before her RCA contract, Zarzuela arias and songs by Granados feature amazingly secure and huge high Bs and Cs, alternating with lovely, filigreed staccato (the aria by Chapi-Ramos, CD2, track 4). The Granados draws our focus to the unforced, natural, dark hue of her tone that makes the brilliance of her top notes even more impressive.

The Strauss song recital is good and has some ravishing moments (“Wiegenlied”, for one) but Lieder was not really her strong suit: throughout her career she occasionally sprinkled recitals with Schubert and Schumann, but they were limited.

The Verdi Rarities CD show her back on home turf; the aria and cabaletta from Aroldo, for instance, may have a bit of smudged coloratura, but the opulence of the voice from C to C is thrilling and the drama concentrated. The carefree number from Un giorno di regno is delicious. These early Verdi arias exhibit a perfect late-bel canto, early-more melodramatic style, despite her career-long lack of a real trill. (She does something else–sort of a warble–that while enchanting, always was a bit weird.)

The Rossini Rarities alone would make her reputation as a virtuoso. The evenness of range for more than two octaves is here partnered with flawless, wild coloratura and a palette of colors that is magical. Her Willow Song, is simply, delicately sung and capped with the softest high A-flat ever captured by microphone; this is followed by a gigantic reading of the “Inflammatus” from the Stabat Mater, delivered with staggering power. Armida’s showpiece, with its two-and-a-half-octave leaps and outlandish fiorature, alternatingly at full voice and at a whisper, must be heard.

The next CD, Zarzuela duets with her tenor husband, Bernabé Marti, is good fun, although while she can be seductive, charming, witty, and subtle, he is happy being loud. A disc of duets with mezzo Shirley Verrett is simply great singing from start to finish, with great drama thrown in in the extended scene between Bolena and Jane Seymour and a wild catfight for the Gioconda duet. Their “Mira o Norma” and the “Barcarolle” from Hoffmann are as smooth as silk, their timbres ideally matched. The Donizetti Rarities CD, with music still considered rare (from Torquato Tasso, Belisario, etc.) is magnificent, not only for her singing and insights, but for the high quality of this little-known music.

The last of the single CDs, “Great Operatic Heroines”, is uneven in both sound quality and performance–stunning scenes from Verdi’s Otello and Donizetti’s Anna Bolena are followed by a disfigured, affected “Depuis le jour” and a “Vissi d’arte” that seems to exist only for its dynamics and for its ascent to and descent from the ultimate high B-flat that seems to take forever.

The Norma is pretty remarkable. Placido Domingo’s strained, learn-by-numbers Pollione and Ruggero Raimondi’s too-young-sounding Oroveso do not help, but Fiorenz Cossotto’s Adalgisa is top notch. After a somewhat pokey start in her big aria, Caballé gains in assurance, drama, beauty, and feeling. She’s breathtaking in the duets. The last act finds her at her most compelling in every way–not just the 20-second-long breaths with perfectly poised tone, but in conviction and total portrayal.

As for the controversial Salome, some have considered it an outrageously “soft” portrayal. And while it’s true that unlike Solti/Nilsson, this set is not a viscerally exciting experience that thundered in the 20th century, it is a gorgeous piece of very-late-Romantic music, with Strauss’ orchestration crystal clear. Caballé presents a beautifully sung, snotty, 16-year-old Salome, probably not nearly crazy enough for the part, but with every dynamic in place and some thrilling, chesty singing to match the big top notes. It’s not a first Salome recording (that’s Nilsson) in the same way that her Norma is second to a few of Callas’, but they’re great shows nonetheless.

The accompaniments are first rate and the recordings are mostly just as good. The “Great Operatic Heroines” has been mentioned above and the Granados and Zarzuela solo discs tend to blare at higher levels. The levels on the Salome set are lowish–with Leinsdorf’s sultry, non-thriller reading of the piece, this was probably intentional. But in all, this is a bargain and a swell compendium of the art of a very important singer."