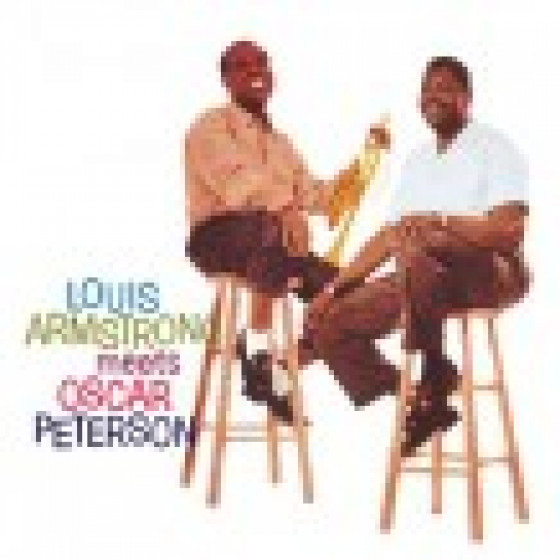 This release contains the complete classic album "Louis Armstrong Meets Oscar Peterson" which presents Satchmo singing and playing standards that were not part of his usual repertoire. He is masterfully backed here by Oscar Peterson, Herb Ellis, Ray Brown and Louie Bellson. As a bonus, we have added two tunes from the same session (Indiana and an alternate take of Lets Fall in Love) only previously available on compilations, and the four Armstrong showcase tunes from the "Ella & Louis Again" session, featuring the same personnel.

(*) Songs that were not included on the original LP.

"Hearing Louis in the unfrilled, ungimmicked setting of the Oscar Peterson rhythm section will be a treat for those who have often seen him in person and wished for fewer encumbrances. Basically Louis needs nobody but Louis he could stand all alone in the middle of the Sahara, singing selected excerpts from the Tunis telephone directory, and we suspect he could make it for a week without food and water. But if there must be someone else, let it be the man whose team made this session such a happy occasion for all concerned."


"An unusual set with Louis Armstrong singing a variety of popular standards in a relaxed and easy-going manner, he is backed by the Oscar Peterson trio and drummer Louis Bellson. Few fireworks occur but the change of pace for Armstrong (who also contributes some brief trumpet solos) is refreshing."