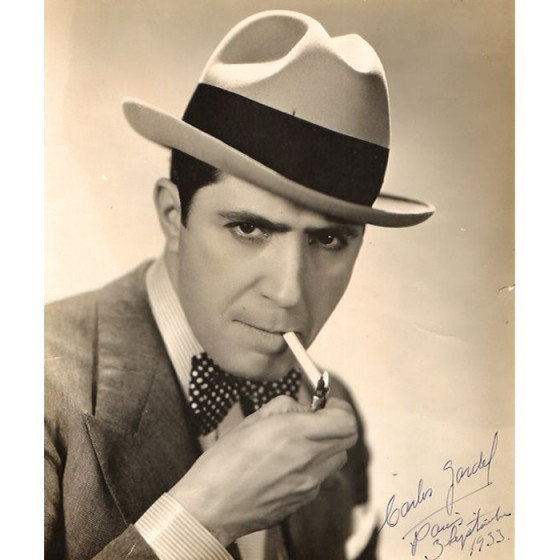 Carlos Gardel was tango's first superstar and still one of its most enduring performers. Revered as an icon in Argentina ever since his tragic death in 1935, Gardel -- nicknamed "El Zorzal Criollo" ("The Creole Thrush") -- was the first singer to adopt the tango as a form of popular song. Previously, it had been entirely instrumental dance music, looked down upon by the cultural elite for its common origins and earthy sensuality. Gardel didn't change those qualities, but his advocacy certainly popularized the genre beyond all expectations. Thanks to extensive touring and a budding movie career, Gardel was able to become a star throughout Latin America and Western Europe; in fact, tango's international acceptance legitimized it in the eyes of Argentine skeptics. Blessed with an expressive, sobbing baritone, Gardel's flair for mournful heartbreak ballads helped establish an important...

Carlos Gardel was tango's first superstar and still one of its most enduring performers. Revered as an icon in Argentina ever since his tragic death in 1935, Gardel -- nicknamed "El Zorzal Criollo" ("The Creole Thrush") -- was the first singer to adopt the tango as a form of popular song. Previously, it had been entirely instrumental dance music, looked down upon by the cultural elite for its common origins and earthy sensuality. Gardel didn't change those qualities, but his advocacy certainly popularized the genre beyond all expectations. Thanks to extensive touring and a budding movie career, Gardel was able to become a star throughout Latin America and Western Europe; in fact, tango's international acceptance legitimized it in the eyes of Argentine skeptics. Blessed with an expressive, sobbing baritone, Gardel's flair for mournful heartbreak ballads helped establish an important part of tango's emotional language. Moreover, his charismatic personal style -- sharp clothes, urbane refinement, and a zest for the finer things in life -- made him a folk hero to countless fans with origins as humble as his own. His meteoric rise symbolically paralleled tango's path to legitimacy and international fame; in Gardel the common folk of Buenos Aires saw themselves and their culture validated on a massive scale. The plane crash that claimed his life at the height of his fame set off shock waves across the Spanish-speaking world, and even today, he is treated with near-religious reverence in Argentina; fans often say that he sings better every day. Gardel rivals Astor Piazzolla as the most important single figure in tango history; if Piazzolla was roughly tango's equivalent of Duke Ellington, then Gardel was certainly its Frank Sinatra -- a towering giant of a vocalist, macho yet sensitive, with an unequaled affinity for the popular song of his homeland.

Gardel was born Charles Romuald Gardés in Toulouse, France, on December 11, 1890. His mother, Berthe, was poor and unmarried, and his father never took any responsibility for the boy's upbringing. An alternate version of his story claims that he was born in Tacuarembó, Uruguay, but this likely originated from Gardel himself, who was always vague about his origins; a French birth certificate has been discovered, and Gardel seems to have falsified Uruguayan papers to avoid raising questions about his obligations to the French military when he re-entered that country on tour. In any case, Berthe Gardés emigrated to the Argentine capital of Buenos Aires in 1893. She and her son lived in cheap tenement housing, and as a youth, Carlos spent much of his time on the streets and in the nearby Mercado de Abasto marketplace. He dropped out of school in 1906 and started to concentrate on singing, with guidance from folksinger José Betinotti. He was soon performing professionally at cafés and restaurants around the area, and also found engagements at parties and political gatherings. In 1910, he became a regular at the O'Rondemann café, and around the same time he officially adopted the Spanish name Carlos Gardel. At this point, his repertoire consisted of folk songs and Creole milongas.

In 1911, Gardel first performed with fellow up-and-comer José Razzano, a talented Urugayan-born folksinger. The following year, Gardel made his first recordings for the Columbia label, and mounted a tour of the area in tandem with singer Francisco Martino, later adding Razzano to form a trio. When Martino left in late 1913, Gardel and Razzano carried on as a duet. They soon grew quite popular, playing most of the major theaters, clubs, and cabarets in Buenos Aires in 1914. They toured much of Argentina the following year, also extending their reach into Razzano's native Uruguay and Brazil; during the latter leg of the trip, Gardel met his idol, Italian opera singer Enrico Caruso, who offered him encouragement and validation. Gardel's promising career nearly came to an end on December 11, 1915, when he was shot in the chest at close range during an argument at a club. Fortunately, the bullet simply lodged in his lung, where it would remain for the rest of his life. He was able to make a full recovery, and was back on the road with Razzano in 1916.

In 1917, Gardel was approached in the Uruguayan capital of Montevideo by songwriter Pascual Contursi, who had set lyrics to a tango by Samuel Castriota that had originally been known as "Lita." Now titled "Mi Noche Triste" ("My Sad Night"), the song told the tale of a pimp pining for his favorite whore; despite its melodramatic leanings, it was wittily laced with expressions drawn from contemporary Buenos Aires slang ("lunfardo"). Against the better judgment of most of his friends, Gardel decided to perform "Mi Noche Triste" in public, making it quite probably the first tango with lyrics that had ever been so officially sanctioned. Razzano distanced himself from the decision, leaving Gardel to sing the song alone on-stage. The audience went wild, and not long after, "Mi Noche Triste" became the first recorded vocal tango, selling briskly to an eager public. Gardel and Razzano toured Argentina and Uruguay extensively over the next five years, taking some time off in 1920 for Razzano to recover from throat surgery. Gardel recorded more tangos during this period, and they were so fervently embraced that he soon decided to concentrate on them exclusively. "Mi Noche Triste" had already opened the floodgates for an immense number of tango songs, which would continue over the '20s and '30s (later described as the music's golden age). He and the now-converted Razzano co-wrote their first tango song together in 1921, "Medallita de la Suerte."

Gardel and Razzano mounted their first European appearances over 1923-1924, performing to great acclaim in Madrid, Spain. Upon returning to Buenos Aires, they became regulars on Argentine radio, and Gardel also made orchestral recordings with bandleaders Francisco Canaro and Osvaldo Fresedo. Continuing throat problems forced Razzano to leave the act in 1925, and Gardel became a full-fledged solo artist. Over the next three years, he split time between Argentina and Spain, performing regularly and recording for the Odeon label in both Buenos Aires and Barcelona. He made his performing debut in Paris in September 1928 to tremendous acclaim, and also made some recordings for the French market, which sold rapidly. By the time Gardel made his triumphant return to Buenos Aires in mid-1929, tango had spread like wildfire through Western Europe, and the cream of Paris society had embraced him with great enthusiasm. Accordingly, he signed a lucrative new record deal with RCA, which ushered in what many fans consider his most productive period.

Inspired by Al Jolson's seminal The Jazz Singer, Gardel turned to film to broaden his audience even further, appearing in a series of shorts during 1930 that helped introduce new songs. He signed a deal with Paramount, which hoped to use him as its entryway into the Spanish-speaking market. Returning to France over 1930-1931, Gardel was a tremendous success once again; while there, he starred in his first full-length feature film, Luces de Buenos Aires, which proved to be a smash hit in Latin America and spawned the hit "Tomo y Obligo" ("I Drink and Make You Drink"). In spite of his massive popularity, Gardel's songs were often still peppered with Argentine idioms and slang expressions that didn't necessarily translate to the rest of the Spanish-speaking world. Accordingly, in 1932, Paramount teamed him with Alfredo LePera, an Argentine-born screenwriter and lyricist living in France. LePera was assigned to ensure that Gardel's material was as universally understandable as possible, and together the two wrote many of Gardel's best-loved and most popular hits. In 1932 alone, the pair completed work on two full-length films (Espérame and Melodia de Arrabal, the latter of which featured a hit title song) and one short (La Casa Es Seria).

Gardel returned to Argentina in 1933, recording and touring heavily in what would prove to be his final year at home. Toward the end of the year, he traveled to New York to make his American radio debut with NBC, and performed regularly for several months; although he attempted to sing in English, his skill in the language was limited, and the idea was later abandoned. Over 1934-1935, he completed four more films: Cuesta Abajo (which featured the title hit and "Mi Buenos Aires Querido"), El Tango en Broadway (another hit title song), Tango Bar, and perhaps his best-loved film of all, El Dia que Me Quieras. The latter featured yet another hit title song and the future Latin pop standard "Volver," among others, and also boasted a brief appearance by Astor Piazzolla, still a child and playing a street urchin. Despite Gardel's earlier problems with English, Paramount featured him in a small part of its revue-style film The Big Broadcast of 1936, hoping to break him to an even larger market (his bit was later cut from the American release).

Finishing his last film early in the year, Gardel decided to undertake a comprehensive tour of the Caribbean and northern South America. He never completed it. On June 24, 1935, Gardel, LePera, and other members of his entourage boarded a plane in Medellín, Colombia, en route to their next engagement in Cali. As the plane was attempting to get off the ground, it veered sharply and crashed into another plane stopped on the runway. Both planes burst into flames, and Gardel, LePera, and almost everyone else on board were killed. The news touched off an outpouring of grief across Latin America, and thousands jammed the streets of Buenos Aires for Gardel's funeral procession and burial. Not only had he been an ambassador of Argentine culture, he had also been one of Latin America's first true international superstars. His following hardly diminished in the years after his death, and he still remains the epitome of tango music for many. Countless compilations of his huge discography have surfaced on a variety of labels over the years. The 50th anniversary of his death was widely commemorated, and his classic "Por una Cabeza" was featured on the soundtracks of several American films during the early '90s.